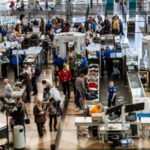 Europol has co-ordinated raids at European airports, targeting criminals trying to travel using fraudulently bought tickets. As the peak summer holiday time approaches, over 141 individuals were arrested last week in the latest law enforcement swoop which took place at over 226 airports around the world.

Between 18 and 22 June, 61 countries, 69 airlines and six online travel agencies were involved in the eleventh edition of the Global Airport Action Days (GAAD) targeting criminals suspected of travelling with airline tickets bought using stolen, compromised or fake credit card details. Some 334 suspicious transactions were reported. A number of investigations have been subsequently opened.

The International Air Transport Association (IATA) estimates that the airline industry loses over one billion US dollars per year as a result of the fraudulent online purchases of flight tickets. In addition, millions of innocent citizens are affected through the misuse of their credit card data.

All regions of the world were mobilised during the Week of Action to respond to the crime of airline fraud which is borderless by nature. The GAAD was organised through co-ordination centres at Europol in The Hague, Interpol’s Global Complex for Innovation in Singapore and Ameripol in Bogota, and was supported by Canadian as well as US law enforcement authorities through the NCFTA in Pittsburgh.

Eurojust assisted throughout the Week of Action, together with the European Border and Coast Guard Agency (Frontex) which deployed officers to 22 airports. The Airport Communication Project, implemented by the United Nations Office on Drugs and Crime in partnership with Interpol and the World Customs Organisation, also took part in law enforcement activities at airports in Africa and the Middle East.

Backing them up, a team of dedicated Europol analysts provided live access to centralised criminal intelligence databases. Interpol assisted with the rapid identification of wanted persons and stolen travel documents and Frontex with the detection of identity fraud, fake documents and irregular migration.

Europol’s executive director Catherine de Bolle said: “Airline fraud is not only highly lucrative for fraudsters, but it creates the risk of serious criminals and terrorists travelling around the world anonymously, potentially to endanger others. Through initiatives like this one, and by working hand-in-hand with our private partners, we’re striving to disrupt criminal movements and activities.”

Sofia Moutsou, chair of the European Airline Fraud Working Group, commented: “Once again, Europol has supported the airline industry with an excellent organisation scale in our fight against online fraud. All of the representative airlines, online travel agencies, card schemes and law enforcement agencies co-operated with Europol in the most efficient way. The results are really important. We protected reservations. We kept flights safe and we also made sure that the criminals were arrested.”