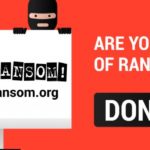 The European Banking Federation together with its member bank associations has joined the ‘No More Ransom’ campaign, a public-private project launched in 2016 offering free decryption tools for ransomware victims and awareness material. Ransomware is a type of malware that blocks a user’s device until a certain amount of money is paid by the victim, often in cryptocurrencies. Ransomware and other forms of online extortion are surging rapidly across the world, costing individuals and businesses billions each year.

At the three-year anniversary of ‘No More Ransom’, more than 200,000 victims of ransomware recovered their files free of charge. This year alone, Europol added 14 new types of tools on its online portal www.nomoreransom.org. Through this portal, victims can decrypt up to 109 different types of ransomware infections, instructed in 35 languages.

GandCrab, one of the most harmful and widespread ransom threats globally, was the first to receive its decryption tool in February last year. Since then, nearly 40,000 people have successfully decrypted their files, saving roughly €50 million in ransom payments.

As main targets of cyber attacks, banks are dedicated to maintain high levels of security on all fronts. Bank security and policy experts are convinced that the best way to keep up with the rapid evolution of cyber crime is close co-operation with public authorities.  The ‘No More Ransom’ campaign is another example of effective collaboration between law enforcement and the private sector.

Thanks to the campaign, European banks will be able to raise further awareness and protect their organisations and customers against cyber criminals and their sophisticated methods.

With visitors from 188 countries, the project has become a one-stop shop for the victims of ransomware, having already registered over three million individual visits in its relatively short life span.

Initially released in English, the portal is available in 35 other languages. English, Korean, Dutch, Russian and Portuguese feature as the Top 5 languages followed by French, Chinese, German, Spanish and Italian, which represents the global nature of the threat.

Steven Wilson, head of Europol’s European Cyber Crime Centre (EC3) commented: “When we take a close look at ransomware, we see how easy a device can be infected in a matter of seconds. A wrong click and databases, pictures and a life of memories can disappear forever. ‘No More Ransom’ brings hope to the victims and a real window of opportunity, but also delivers a clear message to the criminals: the international community stands together with a common goal. Operational successes are bringing offenders to justice and will continue to do so.”