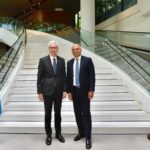 Enhancing global efforts against transnational crime was the focus of a recent visit by Home Secretary Sajid Javid to the Interpol Global Complex for Innovation in Singapore. Meeting with Interpol Secretary General Jürgen Stock, Javid was briefed on a range of security issues in areas including terrorism and cyber crime and the need for strengthening Interpol and the UK’s continued collaboration to address them.

Secretary General Stock highlighted the UK’s ‘key leadership role’ in combating the most serious transnational crimes such as human trafficking.

The Home Secretary was accompanied by Scott Wightman (British High Commissioner in Singapore) and Matthew Collins, director of the Prevent strategy at the Office for Security and Counter-Terrorism.

The delegation was also briefed on Interpol’s policing capabilities and range of global databases which support the police in the organisation’s 192 member countries.

The UK has a long history of co-operation with Interpol dating back more than a century to when the country took part in the first International Criminal Police Congress held in Monaco in 1914, wherein the original idea of establishing Interpol was born.