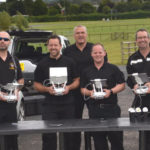 After the successful training of two pilots, an official six-month operational trial was commissioned to find out how drones could be used within the police service for both planned and spontaneous incidents. They were able to deploy a drone where a helicopter was too expensive.

Martyn Underhill, Dorset’s Police and Crime Commissioner, said: “I’ve seen first-hand how deploying drones at a road crash can reduce the impact on the public, especially in rural Dorset on the A35. Drones can capture 3D imagery and information from the scene in minutes rather than hours, and roads can be reopened much quicker.”

Underhill added: “Drones also invaluable in helping with searches for missing people. I’m convinced policing can take huge steps forward with this technology. Deploying a drone costs a fraction of the cost of a helicopter, and they can also be used when a helicopter is unavailable.”

Dorset and Devon and Cornwall’s police forces followed the 12 guiding principles in the Code, for example ensuring that they made every effort to involve the public and the wider community, inform them that they were considering using the drones and informing them about how they would do so.

Following the guiding principles put them in a good position to apply for the UK Surveillance Camera Commissioner’s third party certification scheme.

Ricky Fidler of Dorset Police explained: “Applying for certification seemed an obvious next step for drones as this was another way to ensure that the processes we had in place were suitable and transparent. We found the whole process remarkably simple. Most of the documentation that was required by the Surveillance Camera Commissioner we had already completed – a privacy impact assessment, and so on. We’re familiar with these documents within the police service as we use them in other areas of business.”

There are two steps to certification. The first step, desktop certification, is aimed at organisations working hard to achieve full compliance with the Code, but who are aware that they may need more time to become fully compliant.

The second step, ie full certification, is for those organisations that are close to or fully compliant with the Code. Dorset and Devon and Cornwall’s police forces have achieved Step 1.

Fidler added: “We would absolutely recommend other forces and organisations to apply for certification. It’s a real confidence booster to have someone responsible for the public’s interest check that our systems and processes are legitimate and Human Rights compliant. We will definitely apply for full certification within the 12-month period.”

Police and Crime Commissioner Martyn Underhill concluded: “I’m delighted to hear that Dorset Police has been granted certification from the Surveillance Camera Commissioner’s Office for the use of drones. Policing needs to be at the forefront of technology and quick to embrace innovation. Whether it’s helping to search for a missing person, recording evidence for use in a criminal investigation or giving police officers a unique view of a particular situation, the potential drones have for assisting forces is huge.”