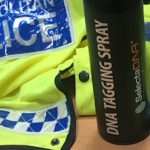 Two teenagers who stole a scooter and later failed to stop for Metropolitan Police Service officers have been arrested after they were found to have traces of DNA tagging spray on them linking them to the stolen bike and the related offences.

SelectaDNA tagging spray is one of the Met’s innovative tactics designed to combat moped and scooter-enabled crime. The spray is invisible to the naked eye, but when exposed to UV light illuminates and allows officers to identify offenders and seize their bikes.

The same spray technology has led to arrests and convictions following its use by other police forces across the UK including West Midlands Police, the Cheshire Constabulary, Surrey Police, Merseyside Police, Greater Manchester Police and Police Scotland.

The Met’s latest incident to involve the spray began on 29 April when a delivery driver’s locked scooter was stolen while he was making a delivery on Maitland Park Road in Camden. On 1 May, two males were seen by officers riding a stolen scooter at speed on Pond Street in Camden. The scooter failed to stop for officers before riding across Fleet Street junction.

Officers co-ordinated air support, ground units and dog units to search and contain the suspects. The scooter was then seen to mount the footpath and continue towards Cressy Road, at which point officers sprayed SelectaDNA tagging spray at the two males and used a tyre deflation device, causing the scooter to come to a stop. 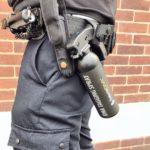 The two males then made off on foot, abandoning the scooter in the road. Suspect A was immediately detained and Suspect B found half-an-hour later hiding in a garden shed in Camden.

The 17-year old youths were arrested for aggravated taking and driving away, dangerous driving and driving with no insurance. They were both found to have traces of DNA tagging spray on them, which indisputably linked them to the stolen bike and the related offences. They were further arrested (while in custody) on suspicion of theft of a scooter. Both males remain in custody at a north London police station.

Commander Julian Bennett said: “Police are working hard to keep the public safe and make the streets a hostile territory for criminals who steal scooters, mopeds, motorbikes and bicycles and then use them for other offences. Our policing activity to tackle scooter-related crime is making a difference as evidenced here, particularly using a range of new technologies including slim-line motorcycles, DNA spray and automatic tyre deflation devices. Our message is simple – if you commit a scooter-related crime, you will be found and arrested. We are using every tactic available to us to bring offenders to justice.”