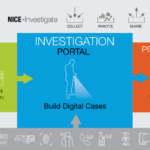 Police forces often face problems when it comes to the collection of digital evidence. As ‘digital’ becomes even more vital in our daily lives, there’s a growing need for police units to invest in a Digital Evidence Management (DEM) solution, asserts Richard Perkins. While a DEM can be an extremely effective way to manage evidence, and in turn help solve cases, they can also hinder the investigative process when the right elements are not in place. Without a solution that’s been thought through and managed in the right way, this can create a ripple effect on public safety.

What, then, should you be looking for in a DEM solution? Here are the Top 5 ‘must-haves’ for an effective digital evidence management solution.

Thanks to new DEM technology, smart phones are not only for officers in the field, but they can also aid crime scene investigators as well. Using new DEM solutions, investigators can connect to a browser-based Investigator Portal from their smart phone or tablet and upload digital evidence (recorded statements, photos, video, etc) into a case file while still in the field. In addition to saving time, investigators can start collecting and building their case before they even return to the station.

With today’s technology and systems integrations, investigators can collect, connect and chase leads right from the phone in their pocket. The faster you can access information, the faster you can take action on it. It’s the equivalent of having a crime analyst in your pocket.

It’s imperative that you gain a full view across the case since successful investigations rely on an investigator’s ability to connect many sources of digital evidence. A myriad of data could mean that, if the investigator is conducting an analysis in one silo, that silo isn’t looking at what’s happening in a different data source or case to compare and draw references between the two.

It’s not just about looking at current cases, either. Many require investigators to correlate current and past cases. Connecting evidence from previous cases, and then aligning them with an ongoing case, is key. For example, if an individual was even briefly mentioned in another case, the DEM solution would automatically bring that information to your attention. With this in mind, your DEM solution also needs to be able to search within the content of records to pull back evidence.

For most police departments, processes are highly ineffective and manual, with groups not gaining access to information when they need it, if at all.

Crowdsourcing is being used by police forces as it can be a very effective system, so let’s take crowdsourced evidence for an example. Crowdsourced evidence in the form of videos, photos and tips often provides some of the best leads in cases. Multiple surveys (including one conducted by NICE, and another conducted by Unisys) have revealed that the general public is willing to share evidence with police departments in an attempt to help combat crime.

It’s vital that a DEM system enables investigators to share evidence with prosecution teams at the touch of a button through a secure portal.

CCTV played a vital role in identifying the perpetrators who carried out the London Underground bombing in 2005, and has since been important to other investigations. With CCTV comes copious amounts of footage, which is a challenge to sift through. Investigators often collect and bring back CCTV video to the station only to find they have no way of actually playing it. Proprietary codecs are needed to make videos playable, and sometimes they can be hard to find and obtain. With the lack of industry standards in CCTV, the recovery of digital video evidence has turned into a research project.

DEM offers a better way by automatically transcoding video into a standard format that can be played on any desktop, laptop, tablet or smart phone.

It’s a time and cost problem. In a larger department, an investigator may have a video specialist on staff, or they may have to wait for someone in a different department to send the video.

The DEM solution creates a working copy of the video and maintains the original version to insure the integrity of the evidence. If there are multiple videos, standardising the format means they can even be viewed and synchronously played back in a timeline along with other multimedia (eg body-worn video, in-car video and audio recordings).

In the early stages of a major case, investigators need to run every single lead to the ground. When there are many moving parts, it’s challenging to keep track of everything.

If detectives are working on a case together, they can then also be alerted when a team member adds any new evidence to a given case folder.