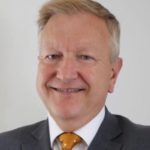 ASIS UK has announced that David Roney is joining the organisation’s Operating Board as director responsible for counter-terrorism and policing. Roney is well known to the wider security community having retired from the police following a distinguished career, most recently having served as the Superintendent in charge of the National Counter-Terrorism Security Office (NaCTSO).

Roney is a high-profile figure, an agile and articulate speaker, extremely knowledgeable within his specialist area of counter-terrorism and policing and brings a wealth of knowledge to the role. He has recently joined VSG, a business that enjoys strong ties with ASIS UK, in the role of strategic account director. He has responsibility for the provision of security guarding and other security services across a range of high level buildings and businesses throughout the City and West End of London.

ASIS UK’s chairman David Clark CPP PCI PSP stated: “David Roney has long been a friend and supporter of the UK Chapter of ASIS and, during the latter part of his career as head of NaCTSO, he was very much our ‘go to’ senior police officer for all things counter-terrorism and policing related. It’s an honour to be able to secure David as our Operating Board director responsible for counter-terrorism and policing. This is an incredible coup for ASIS UK.  This appointment further strengthens ASIS UK’s ability to support its members, while also influencing, advising and leading on matters of national security interest. David adds another layer of expertise to an already impressive roster of experts on our Main Board and Operating Board.”

Roney also led the national P&P response to the 2017 terrorist attacks, in particular improving the working relationship between the police and the private sector and information sharing with security stakeholders. He led the national roll-out of Project Griffin, including its transition to online and self-delivery, and instigated the roll-out of Project Servator across the UK (and to the private sector).

Roney initially served in the City of London Police, where he had a wide range of responsibilities, mainly in community policing and public order. He was commended by the Commissioner for his leadership as ground commander at the Aldgate tube bombing on 7 July 2005.

Roney transferred to the British Transport Police (BTP) in 2006 and commanded the force’s operations for policing the London Olympic Games in 2012. He then led the BTP’s Counter-Terrorism and Armed Policing Unit. In 2016, Roney was awarded the 9/11 Memorial Medal for his outstanding contribution to international counter-terrorism efforts.