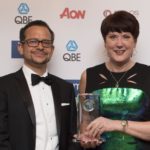 Jose Morago (chairman of the IRM) and Dame Judith Hackitt

Dame Judith Hackitt, chair of the Health and Safety Executive (HSE) and Honorary Fellow of the Institute of Risk Management (IRM), has received the IRM’s prestigious Lifetime Achievement Award.

The IRM’s chairman Jose Morago said that Dame Judith Hackitt is a worthy recipient of the organisation’s premier accolade. “As a subject expert,” explained Morago, “Dame Judith has continually challenged our thinking about risk in relation to the world of Health and Safety, and particularly so in respect of engineering. Dame Judith has always looked to address real world risk, and has been working tirelessly to dispel some of the urban myths around Government policy on this subject.”

On receiving the prestigious award, Dame Judith told Risk UK: “I’m delighted. I’ve always believed that every one of us needs to take responsibility for ourselves and for managing the risks around us. It’s an essential life skill in what is now a dangerous world. I will continue to champion the need for children especially to be taught about risk at an early stage in their lives. It helps them to cope with the world around them.”

Dame Judith was appointed chair of the HSE on 1 October 2007 for a term of five years and then reappointed in October 2012. She previously served as a Commissioner between 2002 and 2005.

Judith Hackitt was made a Dame in Her Majesty The Queen’s 2015-2016 New Year Honours List for services to Health and Safety and engineering, and in particular for being a role model for young women. She was awarded a CBE in 2006.

Dame Judith is a chemical engineer and graduated from Imperial College in 1975. She worked in the chemicals manufacturing industry for 23 years before joining the Chemical Industries Association (CIA) in 1998. She served as director general of the CIA from 2002-2005, and then worked in Brussels for the European Chemical Industry Association (CEFIC).

Dame Judith is a Fellow of the Institution of Chemical Engineers (IChemE) and a member of Council. She was president of IChemE from May 2013 to May 2014 and also duly elected as a Fellow of the Royal Academy of Engineering in July 2010.

Former winners of the IRM’s Lifetime Achievement Award include Lord Currie of Marylebone (previously of the Competitions and Market Authority) in 2015 and Professor John Adams (who won the 2014 award).

The IRM’s Global Risk Awards winners were announced during a glittering ceremony held at the Hilton Hotel on London’s Park Lane.

Nearly 400 international risk leaders from over 40 countries converged for the highlight of the risk management calendar. The event was hosted by TV celebrity Gabby Logan, with VIPs in attendance including His Excellency Saeed Mohammed Al Tayer, the managing director and CEO of the Dubai Electricity and Water Authority. 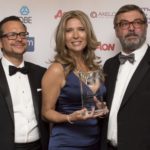 Now in their fourth year, the Global Risk Awards recognise and celebrate enterprise risk management excellence across the world. A total of 17 awards were presented. Highlights included Joanna Makomaski, chief risk officer who worked on the Toronto 2015 Pan/Parapan Games, winning the prestigious title of Risk Management Professional of the Year. Dr Riyad M Jaddal Abu Mahmoud, ERM manager at Wataniya Mobile in Palestine, was the runner-up in this category.

Simon Jones from Citigroup triumphed in the hard-fought International Diploma Student of the Year category.

In all, over 130 entries were received for the 2016 Global Risk Awards. This represents an increase of 50% on last year.

Josè Morago stated: “From its inception 30 years ago here in the City of London, the remit and scope of the Institute of Risk Management has developed to serve a profession that continues to increase in importance, prominence and recognition by the day. The Global Risk Awards celebrate the full range of practical qualities required for risk management excellence in today’s world, and I encourage anyone connected with the risk management community to start thinking about entering our 2017 scheme.”

(1) Risk Management Professional of the Year (Sponsored by QBE)

(4) Cyber Risk Strategy of the Year (Sponsored by AXELOS)

(5) Risk Management Team of the Year (Sponsored by Aon)

(6) Partnership of the Year

(9) Excellence in the Face of Adversity

(10) Risk Management Consultancy of the Year

(13) Risk Management Solution of the Year

(1) International Diploma Student of the Year (Sponsored by Zurich)

International Certificate Student of the Year