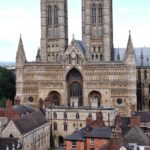 A 300-plus CCTV camera-supported city centre video surveillance scheme in Lincoln has been installed and commissioned using cameras, monitors and switching equipment supplied by Dahua Technology.

The previous analogue-based surveillance system was more than 20 years old and had become expensive to maintain. On that basis, the City of Lincoln Council decided to replace the analogue cameras and transmission equipment with HD digital equipment. The total cost of ownership has been reduced by the savings made on legacy fibre lease costs, as well as reduced energy consumption and the ability to configure and maintain the cameras on a remote footing.

The Council employed independent consultant Lever Technology Group to help them ensure they had a robust and future-proof radio network design.

The installation of the new IP-based Full-HD system and network is part of Lincoln’s smart city strategy – ‘Vision 2020’ – which seeks to drive innovation in the city and harness new technologies to improve the lives of citizens. One of the end results is the provision of free Wi-Fi in the city, working alongside the Dahua cameras using the same IP wireless network.

A combination of fixed and PTZ cameras are installed over a new 1 GB duplex network. These include cameras from the Dahua Pro Series, which feature high image quality, bandwidth efficiency using H.265 compression and excellent low-light performance. Bullet cameras from Dahua’s Ultra Series – with powerful optical zoom, IR distances of up to 50 metres and software which supports people-counting and heat-mapping – have also been installed.

The bandwidth efficiency of the cameras meant that multiple cameras could be installed in any given position, providing 360-degree coverage of locations and up to 20 Megapixels of video capacity per location. This compares with less than 400,000 pixels offered by the previous analogue cameras.

The design of the scheme incorporates both camera and server-side analytics, including video content analytics, facial recognition, ANPR, heat maps and pedestrian counting, as well as legacy motion and audio detection. The objective of the facial recognition aspect is to support camera operators in areas such as the search for missing and vulnerable individuals.

The superior image quality of the new CCTV regime is borne out in figures which show an increase in ‘actionable’ images from 5% with the previous system to 60% successful reviews with the new one. Dahua PoE switches are also installed to provide power to the cameras, which are then connected to a Layer 2 network.

Supplied through authorised distributor Mayflex, the entire system was installed by Public Space CCTV specialist Videcom Security. The company has worked with other partners to provide a high-performance, efficient and feature-rich system.

Bill Mead, managing director at Videcom Security, explained to Risk Xtra that working largely with Dahua video equipment meant it was easier for engineers in terms of configuration, as well as being cost-effective and representing good value for money.

“Working with the Dahua product range has been great,” enthused Mead. “The products have proven to be reliable and we experienced very few problems, from the initial configuration through to installation and commissioning. This is a great collaboration of key project partners that have a tried-and-tested pedigree and working relationship with Videcom Security. We broke new ground with the development of 4K H.265 decoding, the support through Luxriot for camera-side analytics and edge recording and the development by Dahua of camera-to-camera communication, in turn allowing for non-connected systems to communicate locally.”

Dahua has a keen focus on innovation and invests heavily in R&D. For the Lincoln City scheme, the company’s products were selected based on their performance and cost-effectiveness when it comes to meeting stated project budgets.

Videcom Security is a certified Dahua Integration Partner, training for which was delivered both by Dahua and the Mayflex Academy. This helped Videcom negotiate key firmware enhancements, which added to many of the analytical features available in each of the cameras.

The wireless network is built with Infinet 5 GHz and Siklu E and V band radios. Resilience and diverse routing has been built into the network design, which supports video surveillance as well as public Wi-Fi and the capacity for Smart City services.

Luxriot has worked closely with Dahua, supplying its Evo Global VMS and supporting edge analytics integration through ‘events and actions’ management, which has also been integrated through to i-Comply’s VTAS CRVMS software (now rebranded as Viewscape).

The introduction of H.265 compression is groundbreaking for such a project, with the system capable of displaying 4 MP and 6 MP H.265 images to the operator’s spot monitor with real-time control and video streaming.

“The Dahua system implemented by Videcom Security provides the main elements of our Tier 1 solution,” said Martin Byrne, CCTV team leader at Lincoln City Council. “The police are extremely pleased with the system and we’ve had very positive feedback from them. There is really no comparison from how we operated previously to how we can now. The new system revolutionises how we manage the CCTV and data. The potential for what we can achieve going forward is remarkable. We’ve now started to gain real results from the investment in analytics. In particular, both vehicle and people-counting has been deployed and the data used to enhance other city projects.”

Byrne added: “Dahua has taken time out to visit and discuss with us our ambitions for Smart City services. We’ve adopted Dahua as our brand of choice for CCTV cameras and have so far been very pleased and impressed with their reliability, low-light performance and overall image quality.”