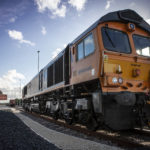 A video surveillance system installed by Daemon Fire & Security and based on an AMG Systems-supplied Ethernet switch network is helping to protect iPort Rail, the UK’s first new inland rail freight hub for over a decade.

The iPort project near Doncaster in South Yorkshire offers six million square feet of space across 337 acres. The massive park is already home to enormous distribution facilities for companies including Amazon, CEVA, Fellowes and Lidl, with its occupancy set to expand in the coming years.

The newly-developed iPort Rail terminal, located on its own 30-acre site within iPort, is connected to the electrified East Coast Main Line via the South Yorkshire Joint Line. It offers integrated access to iPort, meaning that occupiers can directly approach the rail terminal using their own specialist vehicles on the facility’s private roads.

The terminal can handle up to six trains per day and operates on a 24-hour basis six days a week. Each train is able to be the maximum UK length of 775 metres. iPort Rail has an 800-metre reception siding and two 400-metre handling sidings, with storage capacity for 1,500 shipping containers. 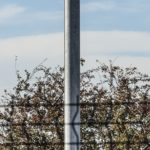 With iPort Rail playing such a crucial role in developer Verdion’s iPort transportation strategy, there was a pressing need to ensure that the terminal has effective ongoing video monitoring. Buckingham Group Contracting Ltd was responsible for the work on iPort Rail, and combined with CCTV specialist Daemon Fire & Security to implement the video surveillance system for the perimeter of the terminal.

Chris Tattersall, technical director at Daemon Fire & Security, said the system runs on a redundant fibre optic network. “AMG Systems assisted us with the fibre optic network design,” stated Tattersall. “The cameras we’re using are from Bosch, and they’re monitored and recorded using the Bosch Video Management System. The cameras are on towers from Altron, with the networking courtesy of AMG Systems.”

There are 32 cameras mounted on 18 towers around the rail terminal site perimeter. Tattersall explained that the cameras are primarily used as detectors to monitor for trespass or intrusion. “The cameras use Bosch analytics, monitoring the perimeter fence for people approaching and trying to climb over or cut through. The cameras are monitored live on a 24-hour basis by members of the security team located in the site gatehouse.”

The system is networked using equipment and expertise from AMG Systems. Daemon Fire & Security and AMG Systems designed a fail-safe fibre optic ring system together. “From the gatehouse there’s a fibre optic cable which goes and loops around every camera tower and goes back to the gatehouse,” explained Tattersall. “It’s a redundant ring, so if there’s a fault or a deliberate cut, everything will carry on working. We’re using industrial PoE Ethernet switches in the towers so that they can withstand low temperatures, which is particularly important during cold winters in what is a relatively open site such as this.” 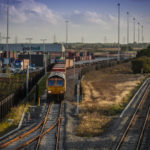 The industrial managed switches, 20 of which were used in this project, are able to operate in temperatures ranging from -40 degrees centigrade to 75 degrees centigrade and are designed for medium-to-large network environments with a view towards strengthening network connections.

AMG Systems’ business development director Sara Fisher informed Risk Xtra that the business is thrilled to be involved in this project. “We were delighted to be asked by Daemon to contribute our design and product expertise to help protect this important and growing freight hub,” enthused Fisher.

Daemon Fire & Security’s video surveillance project took around ten weeks in total, including implementation and commissioning. It was handed over on time and installed on target. Tattersall said the smooth running of the project could be put down to Daemon Fire & Security’s good working relationship with contractor Buckingham, distributor Pro-Vision, networking and transmission expert AMG Systems and product suppliers Bosch and Altron.