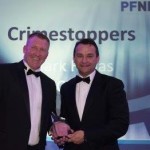 Independent crime-fighting charity Crimestoppers’ efforts have been recognised by the Police Federation National Detectives’ Forum, with the organisation winning an award for its “outstanding contribution to policing”.

The Hopkin Award for Outstanding Contribution to Policing – named after Edna Hopkin, one of the first female police officers in Yorkshire – is presented to agencies considered to have made an important and ongoing contribution towards policing and the fight against crime.

Crimestoppers was chosen in recognition of the anonymous reporting service and crime awareness campaigns that it provides. Information from the public – received via Crimestoppers’ 0800 555 111 telephone number and online form – has led to over 134,000 arrests, £326 million of drugs being seized and £132 million of goods recovered since the organisation’s launch in 1988.

The awards event, held at Hensol Castle in Glamorgan, witnessed members of law enforcement and key stakeholders in attendance, with a number of awards handed out that recognise the tremendous work many contribute towards national policing on a daily basis.

In support of policing

On receiving the award, Crimestoppers’ CEO Mark Hallas said: “It’s a real honour to be recognised by an organisation like the Police Federation National Detectives’ Forum. This award is an acknowledgement of the great work Crimestoppers carries out day in, day out in support of policing in general and detectives in particular.”

Hallas added: “While it’s paramount the public are aware of our independence from the police to ensure we continue to receive vital information, our relationship with law enforcement is also absolutely critical. It’s my fervent hope that we can continue to bring down crime levels across the country. This award highlights that we are certainly working well together in a bid to do just that.”

Martin Plummer, chairman of the Police Federation National Detectives’ Forum, stated: “We’re honoured to present this award to Crimestoppers in recognition of the service provided to the public. The organisation’s contribution to the criminal justice system over the last 27 years cannot be underestimated, while Crimestoppers’ dedication continues to make a real and credible difference to people’s lives in the fight against crime.”