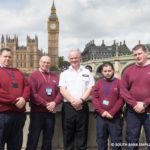 Corps Security, the specialist security services provider, has recognised five of its security officers for their actions during the immediate aftermath of the Westminster terrorist attack, which left four people dead and over 50 injured.

Corps Security officers are contracted by the South Bank Employers’ Group (SBEG) and, on that day, members of the South Bank Patrol Team were among the first people to arrive on scene, helping the injured, cordoning off the area and liaising with all the security and Emergency Services.

Corps Security has worked in partnership with the SBEG since March 2016 to run the South Bank Patrol, which itself works closely with the police in Lambeth and Blackfriars to improve the everyday experience of people who live, visit or work in the South Bank.

The South Bank Patrol Team members are trained in advanced interpersonal skills and adopting a non-confrontational approach. This means they’re able to help manage anti-social behaviour, but they also act as ambassadors for South Bank, helping visitors and Londoners alike with directions.

Some members of the South Bank Patrol have targeted powers under the Community Safety Accreditation Scheme (CSAS).

The calm and professional way in which the South Bank Patrol Team members performed their duties on 22 March has been praised and recognised by Lambeth’s Borough Commander Richard Wood, and led to them receiving a Special Recognition Award from Corps Security for their actions on that day.

“I’m incredibly proud of what our officers did on that horrific day in terms of putting the public first and helping the Emergency Services attend to casualties,” said Webster. “I also know that security officers up and down the country would have responded in the same way, which is why I think that greater respect needs to be given to those who perform security related tasks. They’re often the unsung heroes in situations such as this. I firmly believe that the professionalism of the security industry needs to be more widely acknowledged.”