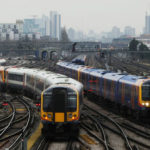 Corporate Risk Associates (CRA) is celebrating the launch of its specialist Rail System Safety Team with the award of three consecutive rail sector contracts. The business has been awarded the contracts as the company pursues its strategy of carving a niche in the growing rail sector.

Contract awards include providing expert support for a major Middle East project, providing safety management consultancy to a second rail operator and a third contract to conduct an independent safety audit for the Serco-operated Dubai Metro.

Formed to initially focus on the nuclear industry, CRA has grown exponentially since the company’s inception in 2000 and provides Best Practice risk management to other industry sectors – including defence – where the same levels of robust safety, risk and reliability standards are demanded on a continual basis.

Speaking about the success of the newly-launched service area, CRA’s founder and CEO Jasbir Sidhu told Risk UK: “The success of our Rail System Safety Team, combined with these very quick and consecutive sector contract wins, heralds a new and exciting challenge for the consultancy. We very much look forward to bringing benefits to our clients in the critical infrastructure sectors, including nuclear and rail.”

The company has experienced rapid growth in the last five years, having worked on some of the country’s largest infrastructure projects (among them the recently approved Hinkley Point C development).

The company has also recently picked up a significant contract win supporting the Office of Nuclear Regulation in performing a generic design assessment of the reactor design put forward by Hitachi-GE (UK ABWR) which is planned for two sites in the UK.

In addition to contract wins, CRA has announced the relocation of its South East offices to new premises in the heart of Vauxhall, South East London.

Speaking about the rail contract wins, Ruairi Kennedy (head of the Rail System Safety Team at CRA) explained: “As a new player in the market, it’s always pleasing to be given the opportunity to demonstrate our ability. I’m glad to have established some good working relationships with our global partners pre-Brexit, and very much look forward to doing the same with our UK and Irish clients as we move forward.”

CRA boasts a team of 35 employees with additional staff embedded in client offices in both Paris and Lyon. The consultancy prides itself on managing safety, risk and human performance across critical infrastructures including the nuclear, rail, defence and finance industries.