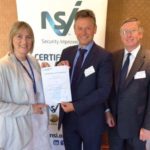 Left to Right: Emma Dowell (CCTV manager at Conwy Borough Council) is presented with the Certificate of Compliance by Tony Porter (the UK’s Surveillance Camera Commissioner who’s standing alongside Tony Weeks (head of technical services at the NSI). The presentation took place at the CCTV User Group Conference on 24 May

To ensure that Best Practice outlined within the Surveillance Camera Code of Practice is followed, Conwy County Borough Council appointed the National Security Inspectorate (NSI) as its designated independent third party certification body, with the Inspectorate duly working on behalf of the Surveillance Camera Commissioner to verify the compliance of the Borough Council’s CCTV systems with the Code.

Recently, the NSI completed a thorough review of their systems and recommended the Council for certification. The verification process is ongoing and the public can be reassured that Conwy County Borough Council’s monitoring is appropriately regulated.

Reassurance for the public

Emma Dowell, CCTV manager at Conwy County Borough Council, said: “The Council is delighted to have received this accreditation of its Public Space CCTV system. We use 114 CCTV cameras across the county covering 15 towns. Inviting independent assessors to check the system will reassure members of the public that we’re operating our cameras for the purposes intended, namely crime prevention and public safety.”

Dowell added: “I would also like to take this opportunity to thank my team of operators, all the members of which are highly trained and have assisted me in meeting the standards required.”

Tony Porter, the UK’s Surveillance Camera Commissioner, responded: “I’m delighted to award Conwy County Borough Council this certificate of compliance. This award sets the standard for Public Space Surveillance and demonstrates to the public that its system is run efficiently, effectively and transparently. I know that the NSI has worked closely with the Council and my own office to ensure this new process runs smoothly. My thanks to all involved, and congratulations once again to Conwy County Borough Council.”

Deployment and use of cameras

Organisations such as local authorities who are directly responsible for Public Space CCTV systems can apply to be assessed against the Surveillance Camera Code of Practice in order to verify that their deployment and use of cameras follows Best Practice, with all CCTV used only for its intended purpose.

The Code of Practice aims to balance the requirement for cameras with individuals’ rights to privacy drawing upon the Protection of Freedoms Act 2012. Receiving a Certificate of Compliance from the Surveillance Camera Commissioner provides tangible evidence that a CCTV monitoring operation fully complies with the Code.

Tony Weeks, the NSI’s head of technical services, added: “Conwy County Borough Council should be applauded for choosing to open up its Public Space CCTV surveillance operations to independent scrutiny, which is in the best interests of the general public. We were delighted to take the Council through the process, and we’re pleased that other local authorities are now following in its footsteps.”