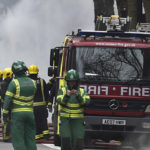 The Association of British Insurers (ABI) is calling for sprinklers to be made a legal requirement in all new warehouses over 2,000 m2 in area as average payouts for commercial fires break the £25,000 barrier for the first time.

Guidance from the Department for Communities and Local Government around fire sprinkler installations only recommends that warehouses in England and Wales should be provided with such a system if they’re larger than 20,000 m2 and it’s not compulsory. These limited regulatory requirements mean that only 20% of warehouses between 2,000 m2 and 10,000 m2 are fitted with fire sprinklers.*

James Dalton, the ABI’s director of general insurance policy, said: “This year marks the 350th commemoration of the Great Fire of London, but the approach to sprinklers remains stuck in the past. While the number of fires continues to fall, it’s alarming that the average cost is rising so sharply. As the Great Fire so strongly demonstrated, failure to prepare buildings to withstand fire can lead to large-scale destruction. The benefits of sprinklers are clear, and it’s now time to make them a compulsory part of every high-risk building, particularly warehouses.”

The recent fire episode at an industrial estate in Battersea, south London, which spread through eight single-story units, was an example of the disruption and expense warehouse fires can cause.

The rise in online shopping has led to larger distribution centres with more closely-packed goods, increasing the risk of fire spreading. When the Sony warehouse was destroyed by fire during the August 2011 riots, 3.2 million pieces of stock were ruined along with the building itself. More than £80 million was paid in insurance claims overall, yet the replacement building – opened the following year – remains without sprinklers.

Legislation is already in place in a number of European countries to require fire sprinklers to be installed in commercial and industrial properties which are significantly smaller than current Government guidelines. Examples are the Netherlands – 1,000 m2, Austria – 1,800 m2, Belgium – 5,000 m2 and France – 3,000 m2

The ABI is also making the case for compulsory sprinkler installations in all new care homes and schools. For their part, the Scottish and Welsh Governments have already brought in new regulations on sprinklers for new and refurbished care homes.