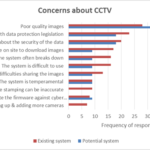 New research has found that a third of housing associations are worried their CCTV images are too low quality to identify criminals or intruders, even though this is why most of their security-focused managers installed CCTV in the first place. Organisations in this sector are also finding themselves in breach of the Data Protection Act, which states that data recorded with the purpose of identifying individuals performing criminal activities must be of sufficient quality to do so, otherwise its capture is unjustified.

The detailed survey on the use of video in social housing, commissioned by cloud-based surveillance solutions concern Cloudview, set out to examine why companies invest in CCTV and also outline their main concerns surrounding surveillance system performance.

The social housing sector was chosen because housing associations rely heavily on CCTV systems to protect their residents and assets alike. They face the continual challenge of managing multiple locations while generating efficiencies and reducing costs, and could potentially gain considerable improvements from increasing digitisation as well as federating data.

Image quality is clearly a major concern, as an even higher percentage of housing associations that don’t have a CCTV system in place had decided against installing it due to poor image quality. In total, 83% of survey respondents rated the quality of rendered CCTV images as being very important.

Data security and compliance with the Data Protection Act are the next most important concerns, showing that data protection legislation is a big issue for housing associations using CCTV. The areas of least concern included the time-stamping of images, firmware updates and adding additional surveillance cameras.

However, there’s no point in having a high-quality image if the time it was recorded is inaccurate, as well as that image being unusable for many purposes such as evidence in criminal investigations. This is another potential breach of the Data Protection Act.

Lack of concern over firmware updates

Similarly, and also a Data Protection Act requirement, any lack of concern for firmware updates shows that end users don’t understand the security risks of not implementing updates and patches, in turn leaving systems open to potential hacking episodes as new security threats are being developed all the time.

Cloudview’s co-founder and CEO James Wickes commented that all of the concerns expressed in the survey surrounding the effectiveness of CCTV – from image quality, secure access and image sharing through to accurate time-stamping – could be addressed by integration with the Internet of Things.

Wickes told Risk UK: “For a CCTV system to serve its purpose, the recordings should be of sufficient quality to identify individuals performing criminal activities and be easily accessible by the police, with the right credentials to be used as evidence, such as accurate time-stamping. It appears that many systems used to protect property, staff or tenants may not be fit for purpose and are breaching data protection legislation, in turn placing companies at risk of fines, bad publicity and even criminal sanctions.”