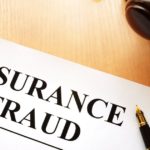 A man who claimed he had suffered an injury at a shop, but was recorded on CCTV deliberately falling to the floor and pulling boxes on top of himself was among those targeted by the City of London Police’s Insurance Fraud Enforcement Department (IFED) in a nationwide operation aimed at suspected ‘opportunistic’ claimants.

A total of 15 people were interviewed at police stations across England and Wales on 22, 23 and 24 May, with each person suspected of submitting fraudulent insurance claims in an effort to gain compensation. Eight have been cautioned. The remainder have been released under investigation. In total, the attempted claims made by these individuals against the insurance industry is £165,110.

‘Opportunistic fraud’ can be committed on all types of insurance, though the IFED’s days of action have focused on suspected fraudsters who have allegedly made false personal injury claims, such as ‘slip and fall’, and household or property claims, for example exaggerating the value of item(s) lost or stolen.

In one of the cases, a woman admitted to lying about being in a taxi when it was involved in a collision. The taxi driver contradicted her claim and said she wasn’t in the vehicle at the time, and was actually their customer waiting for the taxi. IFED detectives also interviewed a woman who made a false claim worth £6,500 for a gold diamond ring after she claimed it had been lost or stolen when she took it off to clean her hands in a public toilet. However, routine enquiries made by the insurer revealed that she’d made the same claim, for the same ring, three years earlier.

IFED officers will continue their investigations into the active cases and further details on their progress are to be provided in due course.

Detective Chief Inspector Andy Fyfe, head of the City of London Police’s IFED, said: “’Opportunistic fraud’ is not a victimless crime and these kind of fake claims are felt by everyone. Through these days of action, we want to clamp down on this type fraud and hammer home to fraudsters, or indeed anyone thinking of making a false claim, that the IFED and the insurance industry will not tolerate it. Be in no doubt: if you make a fraudulent claim, we will investigate and you could end up with a criminal record or even face time behind bars. On top of this, you’ll also face difficulty accessing financial products, such as credit cards, at any point in the future.”

Fyfe added: “These kinds of claims create a ‘compensation culture’ in the UK, with some claims management companies encouraging people to make frivolous and exaggerated claims, often with the alluring offer of a ‘no win, no fee’ service. Such referrals show that some people have no qualms about making false claims. However, the vast majority of people are honest about their insurance claims and it must be infuriating to have to suffer financially as the result of someone else’s criminality and greed.”

James Dalton, director of general insurance policy at the Association of British Insurers, stated: “There can be no let-up in the fight against insurance fraudsters, who push up the cost of insurance for the honest majority. From fraudulent whiplash style claims encouraged by some claims management firms through to inflated losses, never have the chances of being caught been so great or the penalties so severe. Being caught could not only lead to a criminal record, but also difficulties in gaining future insurance and other financial products, like loans and mortgages. Initiatives like this send out a stark warning. Put simply, there is no hiding place for cheats.” Supporting the day of action, Ben Fletcher (director of the Insurance Fraud Bureau) commented: “Insurance fraud is a serious crime, whether it’s opportunistic or organised, and it’s often honest premium paying consumers who suffer as a result. It’s essential that we continue to educate and raise awareness about the serious repercussions of this type of dishonesty in order to deter fraud at the earliest stage possible.”

Fletcher concluded: “Reports from the general public are an essential element in the fight against fraud and the Insurance Fraud Bureau’s Cheatline saw nearly a 5% increase in reports during 2017 when compared to 2016. We hope that continued awareness of the issue, through initiatives such as the IFED’s action day, will mean that fighting insurance fraud remains high on the agenda for both the industry and the general public.”