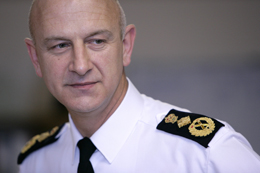 International financial centres, Governments and law enforcement must work closely together to prevent organised criminals and terrorist organisations from bringing global markets to a standstill with a massive cyber attack. This was the message delivered by City of London Police Commissioner Adrian Leppard when he appeared as the keynote speaker at the Financial Crimes and Cyber Security Symposium in New York.

Hosted by the New York County District Attorney’s Office and held in the Federal Reserve Bank, the event was attended by more than 300 delegates from the world of policing, finance and public and private sector cyber security.

Commissioner Leppard, whose UK force is the National Policing Lead for Fraud, highlighted the increasingly sophisticated fraud and cyber threats facing world financial centres, with a particular focus on the City of London and Wall Street. He pinpointed the risks posed by state-sponsored espionage and terrorism using highly complex malware” such as Ransomware and Distributed Denial of Service (DDoS) attacks” to threaten the integrity of trading platforms and major deals.

Commissioner Leppard also stated it’s now vital that law enforcement and financial institutions share information on the current threats. He called for companies to be legally obliged to report to the authorities when they have fallen victim to a cyber attack and thereby ensure steps can be taken to protect other financial institutions and target the offenders.

In recognition of the rapidly evolving and expanding threats to the global financial districts, including London and New York, the City of London Police and the New York County District Attorney’s Office are to forge a closer alliance. From Spring 2015, there will be a staff exchange programme between the two agencies aimed at developing greater operational collaboration, intelligence sharing and de-briefing of investigative Best Practice.

This development comes hot on the heels of the City of London Police signing an agreement with the Royal Bank of Scotland to have financial experts from the bank providing specialist advice and guidance under the force’s new Corporate Volunteer Consultancy Scheme.

Speaking from New York, Commissioner Leppard said:” We cannot underestimate the determination of international criminals, operating alone or as part of serious organised crime gangs or terrorist organisations, to launch a major strike against our financial centres, particularly in London and New York. It’s therefore crucial we take a proactive approach to this threat by putting in place the technical and legal systems that will keep trading platforms secure from malware and prevent companies from being compromised by a rogue employee or weak IT systems.”

The Commissioner continued:” The agreement signed by the City of London Police and the New York County District Attorney is another important step in the right direction, bringing the people who protect the Square Mile and Wall Street closer together and ensuring we’re doing everything we can to thwart what has become a common enemy.”

New York County District Attorney Cyrus R Vance Junior added:” An increasingly close connection between cyber crime and financial crime means that co-operation is more important than ever. Our international partnerships, in particular our ongoing collaboration with Commissioner Leppard and the City of London Police, reflect a changing landscape and the understanding that cyber criminal attacks will not be limited by state or national borders. This is why it’s essential for financial institutions, Governments and law enforcement agencies to work together in protecting the integrity of our markets and financial systems as well as our citizens.”