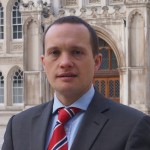 The City of London Police has appointed a new head of department for its specialist Insurance Fraud Enforcement Department (IFED). Detective Chief Inspector (DCI) Oliver Little takes on the role of leading the IFED team from DCI Angie Rogers, and is now looking to build on the department’s success as it marks its fourth anniversary.

A specialist police unit, the IFED is dedicated to diligently tackling suspected cases of insurance fraud across England and Wales. Funded by members of the Association of British Insurers and Lloyd’s of London, and hosted by the City of London Police, the team acts with operational independence while working closely with the insurance sector to target those individuals suspected of involvement in all aspects of insurance fraud.

Since its inception in January 2012, the IFED has investigated tens of millions of pounds’ worth of bogus insurance claims, dealt with more than 1,400 suspects and seized or confiscated over £1.3 million from convicted fraudsters.

As a result of the IFED’s investigations, upwards of 200 people have been convicted at court and over 100 years’ worth of jail sentences handed down by the courts to insurance fraudsters.

Over the past 12 months, the IFED has also been working to design and introduce a new information ‘hub’ which will enable the team to better assess and manage case referrals that come in from insurers. The ‘hub’ will then be able to ensure that the cases with the best investigative opportunities and prospects of conviction are quickly identified and assigned to IFED investigators and detectives.

DCI Little brings with him 16 years’ of experience as a police officer, most recently as the Detective Inspector for the IFED. He began his policing career in Surrey before moving to the City of London Police in 2003, where he has since worked across a variety of specialist detective posts.

In 2009, Little joined the City of London Police’s Economic Crime Directorate, working on complex case investigations before moving to the National Fraud Intelligence Bureau and then on to the IFED in 2014.

Speaking about his new appointment, Little told Risk UK: “The Insurance Fraud Enforcement Department has come a long way since it was first established and, by working in close partnership with the industry, the life of an insurance fraudster in 2016 is undoubtedly much harder than it was four years ago.”

Little continued: “I’m extremely fortunate to be leading such a fantastic group of officers and staff. They’ve been securing some excellent results. Those individuals we’re identifying as being involved in the most serious of insurance frauds are increasingly spending time behind bars.”

In conclusion, Little stated: “Insurance fraud is a serious crime. It costs insurers, the public and the UK economy millions of pounds each year, and in point of fact costs every policy holder around £50 when it comes to their annual insurance bill. I’m very keen to build on the success the IFED has enjoyed to date, and also show that there are serious consequences for those who think insurance fraud is an easy way in which to generate cash.”

Mark Allen, fraud and financial crime manager at the Association of British Insurers, added: “The insurance sector’s investment in tackling fraud is paying off for customers, with millions of pounds’ worth of potential losses either prevented or taken back from criminals. Tackling this form of crime helps to remove costs from the system which might otherwise increase prices for the majority of honest consumers.”

Allen also commented: “Anyone tempted to commit insurance fraud should be left in no doubt that they are at a very high risk of being caught, and face the real possibility of serving a custodial sentence.”