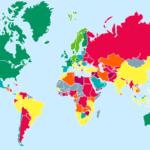 Supply chain risk rose for the second consecutive quarter in Q1 2016, with several natural disasters revealing stark regional differences in the resilience of global supply chains. That’s according to the Chartered Institute of Procurement & Supply’s (CIPS) latest Risk Index, which is produced by Dun & Bradstreet economists.

Despite a 6.4 magnitude earthquake in Taiwan and a 5.8 magnitude quake in Japan (the latter falling just outside the quarter’s end), natural disasters failed to have a major impact on world supply chains. Building regulations designed to prevent widespread infrastructure damage after the catastrophic 1999 earthquake appear to have made supply chains in the region far more resilient, although the collapse of the residential Weiguan Golden Dragon complex is a reminder that these regulations are not consistently observed.

Taiwan’s electronics manufacturers have been able to swiftly resume production, using stock reserves to plug any gaps. TSMC, a major supplier for Apple’s iPhone, reported that only 1% of shipments would be affected by damage to its facilities, while other manufacturers including LCD panel producers and chip-makers have suggested that their plants were able to shut down and restart without taking damage.

In Japan, meanwhile, manufacturers were well prepared, having expanded their inventories and adopted multiple sourcing to prevent a repeat of the widespread disruption experienced following the 2011 earthquake.

The slight increase observed in Asian supply chain risk this quarter, from 26.68 to 26.79, comes from man-made causes as suppliers in New Zealand and Australia struggle to make ends meet during what has been a period of persistently low commodity prices combined with economic slowdown in China.

However, there will be a particular set of ethical concerns for those businesses with supply chains which involve Chinese manufacturing or construction. Labour disputes in these sectors have risen as firms struggling with cash flow increasingly opt to withhold pay.

With new evidence emerging this quarter that the majority of supply chain managers lack the skills to detect the mistreatment of workers in their supply chain, it remains difficult to assess the true scale of the problem.

While Asian manufacturers have effectively contained the impact of natural disasters, the same cannot be said of Sub-Saharan Africa. South Africa and Ethiopia in particular are struggling to cope with the prolonged drought caused by the El Nino weather system. South Africa’s output of white corn alone has fallen by 31% this year.

Despite these factors, the relatively low share of exports coming from Sub-Saharan Africa means that it only contributed 2.47 of the 79.8 points of risk in global supply chains this quarter.

Western Europe, which provides the second greatest proportion of global supply chain risk after China, saw its contribution grow slightly from 23.77 at the end of 2015 to 23.98 this quarter. The change here was driven by man-made factors, with the horrific terrorist bombings in Brussels helping to fuel the growth of far right political groups in France and Poland (the rule of law suffering significant damage in the latter).

Such heinous attacks have increased calls for the passport-free Schengen zone to be abandoned: a move with the potential to slow the flow of goods around Europe quite considerably.

The possibility that the UK could leave the EU following the Referendum to be held on 23 June has so far only had a minor impact on supply chains, with business leaders waiting until after the vote is concluded before making any preparations. Nevertheless, there remains some evidence to suggest that long-term orders are being delayed as supply chain managers wait to see how and whether new trading agreements might impact their business.

Supply chain risk in the Middle East and North Africa has remained relatively stable this quarter, although there are growing signs that optimism over Iran’s reintegration into global supply chains following the end of nuclear sanctions might be misplaced.

Nevertheless, European businesses are particularly nervous about doing business in Iran, while Iranian business culture itself requires personal relationships to develop gradually before deals can be agreed.

John Glen, CIPS economist and senior economics lecturer at The Cranfield School of Management, told Risk UK: “The latest Risk Index shows that a lack of trust between businesses can be just as damaging to global supply chains as a natural disaster. The weak link in your supply chain is just as likely to be a lack of cultural understanding among procurement professionals as it is the threat of a freak weather system.”

Glen added: “The first step towards building resilient supply chains is identifying what those risks are. The experience of businesses in Japan and Taiwan really goes to show that even the most traumatic of events can be safely navigated.”

About the CIPS Risk Index

First launched in April 2014, the CIPS Risk Index is a composite indicator of pressures acting upon supply chains globally. The Index analyses the socio-economic, physical trade and business continuity factors contributing towards supply chain risk across the world, weighting each score according to that country’s contribution to global exports.

The Index helps sourcing professionals understand the risks to which their supply chains are exposed, articulate questions and scenarios for key suppliers, inform assurance activities, check the readiness of contingency plans, support the negotiation of risk transfer in contracts and establish factors which may impact the financial stability of Tier One and sub-tier suppliers upstream.

CIPS has a global community of 115,000 practitioners operating in 150 different countries. Those practitioners include senior business professionals, high-ranking civil servants and leading academics.