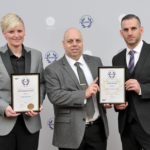 Chubb Systems has just received a Gold Award from the Royal Society for the Prevention of Accidents (RoSPA) for the fifth consecutive year, while Chubb Fire & Security received the Gold Award for the second time following its first Gold Award in 2016.

Chubb Systems has been awarded a Gold medal in recognition of achieving the top Gold Award for five years in a row. Nichola Maher, environmental Health and Safety manager at Chubb Systems, accepted the award on behalf of the organisation. “We’re proud to have achieved the top Gold Award five times in a row,” enthused Maher. “It demonstrates that we’re never complacent. We go to extensive lengths to protect our employees and have a robust and ongoing commitment to ensuring that every Chubb employee is working in the safest conditions.” 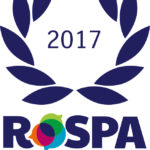 Mark Redding, head of environmental Health and Safety at Chubb Fire & Security, asserted that Health and Safety is a core value and at the heart of everything Chubb does at every level of the business. “We attach tremendous value and importance to these awards,” stated Redding. “Achieving these results engenders the utmost support from the most senior levels of our organisation.”

By achieving a RoSPA Award, an organisation is proving its commitment to maintaining a well-balanced approach to Health and Safety management, as well as demonstrating superior practices in areas such as leadership and workplace contribution.

This year, Chubb joined RoSPA at its Centenary Royal Garden Party held at Buckingham Palace to celebrate 100 years of the latter organisation saving lives. The event provided an opportunity for members, award winners and supporters alike to join members of staff and volunteers in marking a century of hard work and dedication to saving lives and reducing injuries.