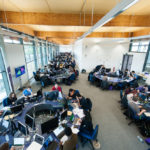 Hugely talented individuals from UK and US universities have fired up their laptops to battle a dangerous (but fictitious) rogue state developing Weapons of Mass Destruction (WMD) in the life-like cyber security competition that is Cambridge2Cambridge (C2C). The Government and industry-backed competition – which is the brainchild of two of the most prestigious universities in the world, namely the University of Cambridge and the Massachusetts Institute of Technology (MIT) – pits teams of future cyber defenders against each other in a three-day battle.

No fewer than 110 future cyber defenders from 24 of the most prestigious universities in the US and the UK are taking part in the competition at the University of Cambridge. The mixed teams of UK and US students are battling for thousands of pounds’ worth of prize money, with a total of £20,000 up for grabs over the course of the challenge.

Pupils have formed international ‘cyber hunting’ teams to mount an offensive cyber attack in order to subdue a facility where a fictitious rogue state is developing and caching WMD. The cyber attack is necessary, as the weapons are hidden in facilities deep underground, with ‘bunker bombs’ proving ineffective and poor weather conditions preventing allied ground troops from mounting an offensive. 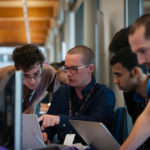 Held within the historic grounds of Trinity College at the University of Cambridge, the competition started on Monday 24 July and ends today. It’s backed by the National Cyber Security Centre, the UK Cabinet Office and industry partners Leidos, the NCC Group, Context, Palo Alto Networks, KPMG, ForAll Secure, Immersive Labs, Wiley and, last but not least, the National Science Foundation.

On the broader stage and with far-reaching goals in mind, the competition is designed to tackle the critical cyber security skills gap, which latest figures suggest will increase to encompass a 1.8 million person shortfall globally by the year 2022.

Leading academics behind C2C have also designed the competition to promote greater cyber security collaboration between the UK and the US and afford students the platform to explore creative ways in which to combat global cyber attacks, as well as honing and acquiring critical skills at the same time.

In addition, C2C gives budding cyber enthusiasts the opportunity to test and improve their skills in a real-life simulation, meet with like-minded individuals and learn more about careers in the sector by introducing them to key players across both industry and Government. 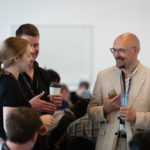 Professor Frank Stajano, head of the Academic Centre of Excellence in Cyber Security Research at the University of Cambridge and co-founder of Cambridge2Cambridge, commented: “In the second annual Cambridge2Cambridge challenge, we’ve looked to expand on the success of the inaugural C2C by welcoming students from top universities from across the UK and the US. It’s truly remarkable to witness the breadth of cyber talent in universities throughout these two countries.”

Stajano continued: “C2C gives these bright young people the opportunity to implement the skills and theory they’ve been taught at university in a realistic environment, while learning new ones in the process. We have over 100 smart students here in Cambridge, but I hope their achievements go on to inspire hundreds of thousands more secondary school students to take up this challenging and intellectually stimulating path when they eventually head for university. We’re growing a new generation of skilled cyber security experts who’ll protect the digital society of tomorrow.”

Dr Howard Shrobe, principal research scientist at MIT’s Computer Science and Artificial Intelligence Lab (and also a co-founder of Cambridge2Cambridge), stated: “The relevance of cyber security has arguably never been greater. Recent attacks on corporations and Governments alike have focused our attention towards the need for a strong pool of talent to bolster our defences. Cambridge2Cambridge was born out of a need to spur innovative ideas, bringing together the brainpower from MIT and the University of Cambridge, so it only seems natural to involve more leading universities in the second year of C2C and continue to inspire the world’s leading minds when it comes to tackling an ever-growing issue. Only by giving these talented students the tools needed to enter the industry will we be able to tackle the growing threat from cyber criminals and terrorists.” 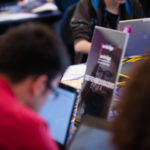 Chris Ensor, the National Cyber Security Centre’s deputy director of cyber skills and growth, observed: “Cyber security is one of the most important professions for any digitally-enabled country, and I’m proud that the UK is a world leader in this field. We need the brightest and the very best talent to stay ahead of rapidly evolving global cyber threats. I’m hugely impressed by the skills and enthusiasm of the young people taking part in this competition.”

Ensor also stated: “I’m particularly pleased to see more women taking part this year. The participants I’ve seen here have a bright future in the cyber security field and will be at the forefront of keeping our nation safe and secure in the years ahead.”

Ollie Whitehouse, CTO at the NCC Group, informed Risk UK: “As cyber attacks become an increasing concern for businesses and consumers alike, the need to equip a new generation of talented minds with security skills has never been greater. By offering their expertise, becoming involved in events and speaking to young people, security professionals can encourage a passion for security and bring innovative new ideas to the industry.” 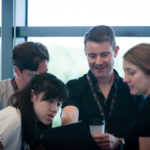 Whitehouse went on to explain: “Initiatives such as the Cambridge2Cambridge competition are a great way in which to inspire young people and demonstrate how exciting, creative and rewarding a career in cyber security can be. We’re very pleased to be so closely involved in this initiative and looking forward immensely to seeing what the talented students in the competition will achieve.”

Bill Krampf, senior vice-president for the UK and Europe at Leidos, concluded: “Recruitment and developing the capabilities of our workforce is a key enabler to defend our nations and clients. We live in a world where new skills have to be honed to defend against adversaries. Only through continued partnerships with universities can we truly help to shape the skills that are coming into the future workforce.”

The Cambridge2Cambridge competition is run on CyberNEXS, a cyber range from Leidos which is used to train the US military.

The New ISO Standards: What Can They Bring to Your Business?