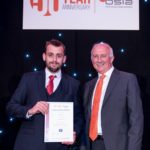 The British Security Industry Association (BSIA) has announced the national winners of its 2017 Security Personnel Awards. The award presentations took place on Wednesday 12 July at the Trade Association’s Annual Luncheon, held at the Grand Connaught Rooms near London’s Covent Garden. As well as being a celebration of the outstanding achievements of security personnel, the Annual Luncheon was a particularly special occasion as it was also a celebration of the BSIA’s 50th Anniversary.

The renowned Security Personnel Awards are currently in their nineteenth year and have been sponsored by Camberford Law plc – specialist insurance broker to the security industry – since their inception. The awards themselves serve to recognise the talent, dedication, skill and bravery exhibited by security personnel in their roles each and every day.

This year, there was a special commendation, runner-up and overall winner for each of the five categories: Outstanding Act, Best Newcomer, Best Use of Technology, Service to the Customer and Best Team.

Discussing the value of the Security Personnel Awards, James Kelly (CEO at the BSIA) explained: “The past year has been extremely testing for the United Kingdom, with numerous terror events shocking the nation. In times like these, it’s important to recognise the true value of security personnel, who are often the first responders during emergency situations and play a vital role in keeping our country safe. This year’s winners are a perfect testament to the truly high calibre of personnel we have working within our industry.”

Kelly went on to add: “We received a high number of fantastic nominations this year, making the judging process a tough one. This year’s winners should be extremely proud of their achievements.”

This year’s Keynote Speaker at the Annual Luncheon was renowned publisher, writer and broadcaster Andrew Neil, who entertained guests with discussions about the political climate in the UK, Europe and the United States.

Talking about the company’s long-standing support of the Security Personnel Awards, David Ottewill (managing director at Camberford Law plc) commented: “Camberford Law plc is delighted to be involved in sponsoring the BSIA’s Security Personnel Awards 2017. We applaud and encourage the promotion of professionalism within the industry and also the hard work and dedication required by the entrants to achieve their accolades. We’ve been insuring security companies for over 30 years. All-too-often, though, the work of the security company and its constituent individuals is overlooked, despite the fact that these businesses play such a crucial role in public life. We feel it’s only fair to recognise the outstanding achievers in this field. Well done to all the 2017 finalists.”