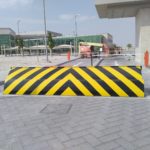 On Thursday 1 June at 3.00 pm, the British Security Industry Association (BSIA) will be co-hosting a webinar with the United States’ Security Industry Association (SIA). Titled ‘Stopping Vehicular Attacks: How We Can Protect Against the Latest Terror Weapon’, the webinar will explore the role of the security industry in tackling the increasing threat of vehicular attacks.

“Over recent years, we’ve seen an increasing number of terror attacks in which a vehicle was the main weapon, and particularly so in Europe,” commented Felix Parker-Smith, the BSIA’s public affairs executive who’s co-hosting the webinar alongside Jake Parker, the SIA’s director of Government relations. “Last summer in Nice, 86 people died and countless others were injured as a cargo truck mowed down crowds celebrating Bastille Day. Following that, we saw vehicular attacks in Berlin, Ohio, Westminster and, most recently, Stockholm. With this in mind, we felt that hostile vehicle mitigation was a very topical and important subject on which to focus an international panel discussion.”

Lasting between 60 and 90 minutes, the webinar will feature short presentations from a panel of knowledgeable speakers from both the USA and the UK focusing on their area of expertise. The speakers will then take part in a panel discussion regarding the best methods for tackling vehicular terrorism. This will be followed by a Q&A session where viewers will have the opportunity to direct their own questions to the panel.

While a full speaker line-up will be announced closer to the date, confirmed speakers at present are:

*Andrew Majoran (lead terrorism analyst, The Risk Advisory Group) Originally from Canada, Majoran attained an MSc degree from the Royal Holloway University of London. After graduating, he was offered an internship with NATO Canada which led to a series of opportunities around the world conducting independent international security consulting and policy analysis. Those opportunities have included working with the Delegation of Canada to the Organisation for Security and Co-operation in Europe in Vienna, where Majoran conducted research and analysis under the direction of the Canadian Ambassador and her staff on various security matters, including the Ukraine crisis, small arms and light weapons control and cyber security.

*Rob Reiter (co-founder of the Storefront Safety Council) Reiter is a consultant and expert on pedestrian safety technology and perimeter security. He became active in this area of security in the post-9/11 environment and, in 2012, co-founded the Storefront Safety Council, in turn using his expertise to tackle the rise of vehicle attacks on retail premises in the US. Reiter is also a regular news commentator in the US for various media outlets including ABC News and CBS News.

*Ian Mansfield MBE (security advisor for Vision Security Group) Mansfield served as a City of London Police constable for 25 years before joining VSG as a security advisor. During his time as a police constable, Mansfield served as a specialist Counter-Terrorism Security Advisor and led a multitude of counter-terror operations with the force during the height of the IRA bombings in London. In 2014, Mansfield was awarded an MBE for his work on Project Griffin, an initiative that has brought the police and the security industry together in a combined effort to tackle terrorism.

Key learning points from the webinar will include how the public and private sectors can maximise the effectiveness of protection measures designed to thwart vehicle-borne threats, the return on investment from both a safety and security standpoint and potential policy solutions that could spur implementation.

*Those wishing to participate in the webinar can dial-in from their devices for free. Register here: https://attendee.gotowebinar.com/register/5732090948462731523