Recently, a story appeared in the national media about how a robbery was thwarted due to the in situ security measures which scared the criminals away. Situations like this make us reflect on the fundamental roots of security and the reasons why it exists in the first place. With that in mind, this month we head to the very heart of security as Carl Gibbard assesses the crime deterrents developed by BSIA member companies and examines what they actually do in practice.

What with standards being constantly updated and the national media often focusing on very few aspects of what is an important and complex industry, it’s all-too-easy to overlook the fundamentals of security and its ultimate goal – to protect people from harm and their assets from being damaged or stolen.

When it comes to security systems, smoke screens are the ultimate deterrent because they take away the criminal’s ability to grab and steal. Criminals know that they can evade CCTV by wearing a baseball cap, for example, to hide their face. They also know that shutters and grilles can be broken through force, but they have no defence whatsoever against the blinding and disorientating effects of a smoke screen.

The initial burst of security fog stops criminals in their tracks, preventing them from committing a grab-and-go attack. The fog will hang in the air for around 45 minutes, protecting the property that’s under attack until the police or private security staff arrive on scene. Smoke screens can be triggered either automatically or manually depending on the situation.

Non-toxic, non-contaminating and extremely effective, security fog currently provides protection where all other forms of conventional security have failed.

The key takeaway of this particular deterrent is its non-harmful, but nevertheless striking impact on the senses – in this case visibility – that triggers a fight-or-flight response. A criminal may expect an alarm or CCTV to confront them, but not necessarily thick dense fog. 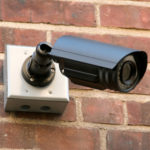 Visibility can play a vital role in deterring criminals in other ways, and especially so if they’re pre-warned that a given premises is protected. Simon Banks, founder and Group managing director at CSL and current chairman of the BSIA, said “One of the two main deterrents aligned with intruder alarm systems is the window sticker and the bell or siren on the home or commercial property. Research has shown that the sight of a siren box with logo on the exterior of the property will prevent an intrusion. It’s about credibility. If it’s a respected security company with a good reputation and credentials such as an Inspectorate and/or Trade Association-approved ‘badging’ then this will carry more clout. Brands associated with DIY alarms will not meet with the same response from would-be intruders.”

Tim Raynor, video surveillance product manager at ADT, disagrees that visibility alone will deter crime as it depends on the type of criminal. “The visibility of a security system is enough to deter an opportunist criminal, but a career criminal who has planned ahead wouldn’t be put off,” asserted Raynor. “It’s now a sad fact that most people ignore a ringing alarm, so it’s the responsibility of security industry leaders to develop innovations that help to reduce crime.”

Raynor continued: “When it comes to monitored systems, these functionalities have evolved significantly over the last decade. An audio challenge feature, which enables an operator to remotely challenge an intruder on a property, adds an extra protective layer to any security system. In fact, statistics issued last year by Johnson Controls state that 98.5% of intruders are deterred in this way.”

In addition, Raynor went on to state: “Community groups such as Neighbourhood Watch are still prevalent to this day. As crime levels around the UK continue to be an issue, we’re seeing both businesses and consumers using platforms such as Facebook and WhatsApp to share information in real-time, allowing them to quickly take steps to protect their property. For its part, the security industry is now starting to talk about the use of Artificial Intelligence as the solution for improving security and reducing false alarms. As this technology develops, there could be significant improvements in people only needing to respond to genuine alarm activations, making these systems even more of a deterrent in the future and helping to reduce crime levels.”

What about larger venues? 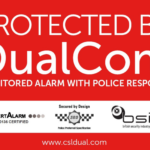 How do larger venues and open spaces deter crime? James Walker, managing director of Dallmeier UK, has mentioned the use of a sophisticated surveillance system for large venues and stadiums to ensure the safety of fans at all times. Unchecked crowds or brawls between fans seem to be security personnel’s most feared scenarios.

“With today’s multifocal sensor systems, a huge area can be monitored from a single location extremely efficiently. The most impressive aspect of these systems is that they combine the overall view with simultaneous top detail resolution. Even more distant objects are displayed with the same resolution as objects in the foreground of the picture.”

Walker went on to add: “Further, these systems solve the well-known problem with PTZ cameras whereby the operator has to choose between an overview image and a detailed view. It doesn’t matter which section of a surveillance area an operator focuses on at any time, because the system always records the entire scene. Therefore, it’s possible to reconstruct any event for later use as evidence in court, regardless of where that occurrence took place, and to recognise all individuals involved thanks to frame-by-frame playback.”

Gideon Reichental (commercial sales manager at Clearway Services, the specialist in site security, and current chairman of the Vacant Property Section of the BSIA) observed: “Open spaces such as construction sites, car parks, sports grounds or leisure areas are a real temptation for criminal or anti-social behaviour. Statistics show that at least one-in-five building sites are hit as frequently as once every week, and possibly even more than that as minor incidents are often not reported.” 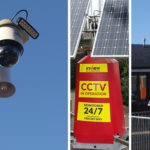 However, Reichental is swift to point out that it isn’t difficult to secure such places. “Where appropriate, proper secure fencing is a ‘must’. Temporary concrete blocks can be installed at site access points if it’s a vacant property. This will stop unauthorised ingress and theft or fly-tipping, which is now a major menace. A wireless alarm system can be fitted to the fencing and advanced temporary CCTV camera towers located at key points.”

Running off mains or solar power and engineered to remain outside in all conditions, the CCTV towers communicate via the mobile network. These installations are the end user’s remote eyes, surveying an entire site thanks to movement-activated HD cameras. When triggered, they issue voice warnings to trespassers so they know they’ve been spotted if they have managed to break in or are simply causing mischief. They’re a great deterrent.

Activation and live video can be beamed back to an Alarm Receiving Centre whose operators will, in turn, raise an alarm, send a security guarding patrol and/or contact the police to apprehend the intruders if the audio warnings should be ignored.

In the real world

A final scenario relating to this subject involves a real-life Case Study from Gallagher Security.

One of the fastest-growing districts in the upper Midwest of the United States, Harrisburg in South Dakota is home to an educational system that serves almost 4,000 students across eight schools. Gallagher Security was selected to meet the district’s security requirements and, in October 2015, those security measures were put to the test when the local High School became the target of a shooting. 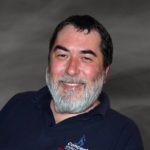 Although one staff member was injured in the episode, it was prevented from escalating further due to Gallagher’s lockdown procedure being activated by members of staff. From the time the emergency button was pressed, it took just four seconds for Command Centre to lock all outside doors, notify the district authorities and limit building access to emergency responders only. “Command Centre was directly involved with placing physical barriers between an active gunman and hundreds of High School students,” explained James Straatmeyer, CEO of Integrated Technology & Security.

In summary, then, crime deterrents come in many shapes and sizes and are specific to the types of criminals which target a place. In reality, deterrents must be about both guesswork and strategy, with visible and hidden deterrents alike underpinned by wholly credible intelligence systems.