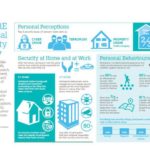 The BRE’s National Security Survey has revealed that personal security is becoming an increasing worry across the UK, with two out of every three respondents questioned now more concerned about crime today than they were five years ago. The Top Three issues raised as causing the greatest concern are cyber crime, terrorism and property crime.

Developed by the creators of SABRE (the BRE’s security assessment and certification scheme for new and existing buildings and built infrastructure assets), the National Security Survey was initiated to help understand how people’s perceptions influence their everyday decision-making in relation to their home life, working life and travel arrangements.

Gavin Jones, director of SABRE, commented: “Although we’re continuing to identify effective ways in which to protect our built environment from crime and terrorism, these efforts are not necessarily reflected in the general public’s perceptions of their own personal security. Despite the fact that the likelihood of an individual being directly affected by a terrorist incident is extremely remote, recent events are having a disproportionate impact on people’s lives. They appear to be influencing where people are willing to travel, where they stay and whether or not they attend a major event or concert. Members of the public clearly need reassurances that the places in which they live, work and visit are safe and secure. It’s in the interests of businesses to find innovative solutions to this problem.”

While property crime is ranked as the highest security concern, with 43.17% of participants listing it as a major concern, the majority of respondents (87%, in fact) believe their homes to be either secure or very secure.

One of the key factors identified by the National Security Survey in making respondents feel safe and secure at home is well-designed and maintained areas immediately adjacent to their properties. In 2015, security was introduced into the Building Regulations guidance for the first time in the form of a new Approved Document. Approved Document Q ‘Security – Dwellings’ introduces requirements for windows and doors on all dwellings constructed in England. 63% of respondents identified such features as the second most important factor in making them feel secure in their home.

The National Security Survey also highlights the importance of crime and security in influencing the purchasing decisions of home buyers and tenants, with half of respondents stating security is a major influence on their choice of property and a further third believing it would have a minor influence on their decision to either purchase or rent.

In 2016, there were 38% more cyber security incidents than in the previous year, while 2017 witnessed a number of high-profile episodes, including a direct e-mail hack on the Houses of Parliament and the DDoS attack on Lloyds, Halifax and Bank of Scotland, which ran for two days in January. The incident came just months after a serious cyber heist against Tesco Bank, when no less than £2.5 million was lost from 9,000 accounts.

Following the increase in tempo of notable cyber attacks, it’s of little surprise to see a quarter of respondents placing cyber crime as their highest concern. Despite this, one-in-five placed it as their lowest concern. This could mean these particular individuals are either content with existing security controls or perhaps agnostic towards the potential threats posed.

Either way, it’s clear that there’s a lot more to be done in relation to the threat posed by cyber criminals, with the global cost of online attacks estimated to reach a figure of $2 trillion by 2019. That represents a three-fold increase from the 2015 estimate of $500 billion.

In a year when UK terror arrests rose by 68% to attain record levels, coupled with a string of large-scale attacks across the UK and Europe, terrorism has been a regular feature of daily news broadcasts and social media feeds. This notoriety has undoubtedly led to increased concern around the issue, with two-thirds of respondents to the survey stating that recent acts of terrorism have led them to become more security-conscious when ‘out and about’.

When asked whether recent terrorist attacks across Europe had influenced their travel decisions within the UK, one-in-two respondents said they had. This demonstrates the remarkable societal reach of terrorism, which harbours an ability to create fear far beyond the individuals directly involved in a given incident.

The economic impact in sectors such as tourism can be significant. In the aftermath of the 2015 Paris attacks, for example, the number of tourists entering France fell by 8%. It’s also estimated that tourism revenues in Paris alone were reduced by something in the region of €1.5 billion.

The BRE’s National Security Survey asked respondents whether their choice of hotel would be influenced by security, with one-in-five respondents stating it would be a major influence when selecting where to stay. Similar results were seen when respondents were asked about attendance at major events and concerts. Clearly, terrorism is influencing behaviours and making the general public more security conscious when they’re planning to be away from home.

When respondents were asked whether they would make use of a security rating scheme (similar to that used by the Food Standards Agency for food hygiene) for different types of facilities, 70% said they would be influenced by a scheme adopted by hotels, with 60% the corresponding figure in the case of airports and entertainment venues.

Other notable facility types for which a security rating scheme would be welcomed include retail malls, transport premises and entertainment venues. Clearly, there’s a desire among the general public – and particularly so when they’re using crowded places – for greater assurances that these locations are both safe and secure.

In terms of security in the workplace, over 80% of respondents felt either secure or very secure at their place of work. The majority of respondents (83%) stated that they hold their employers responsible for their safety while at work, with nearly three-quarters recognising their own role in workplace security.

When asked what types of security measures would make them feel more secure in the working environment, at the top of the list (with a score of over 58%) is the desire to see proactive management and regular security updates for employees. Security-rated windows/doors and CCTV installations came in second and third place respectively, highlighting that investment in management and the creation of a security culture in the workplace may have every bit as significant an impact in creating an environment where staff feel safe and secure as do capital-intensive crime prevention and security interventions.

*Download a copy of the BRE’s 2017 National Security Survey at: www.bregroup.com/sabre/downloads