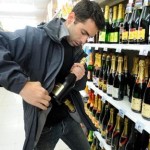 The British Retail Consortium’s (BRC) latest Retail Crime Survey report reveals stark new figures showing that the total cost of crime to the retail sector across 2014-2015 was a massive £613 million. This figure represents a 2% increase on the previous year, and is the highest total recorded since records began.

The 2015 study highlights that the average value of goods stolen has risen by over a third to £325 per incident of customer theft, duly representing another all-time record. Despite this, the total number of offences has dropped for the second year in succession.

Retailers in the BRC’s sample reported 750,144 offences over the last year. That’s a drop of 2% when compared to 2013-2014. The high value of items stolen compared to the fall in the total number of crimes has led industry experts to conclude that crime against retailers is increasingly being carried out by sophisticated criminals stealing to order.

This conclusion is borne out by data showing that fraud episodes are also on the rise. The majority of retailers surveyed report that the level of cyber attacks has increased or remained unchanged in the last year, while fraud rose by 55% and now accounts for more than a third (36%) of the cost of crime perpetrated against retailers.

According to the BRC, the human cost of retail crime has also risen. Data collected shows that there has been a 28% increase in offences involving abuse or violence against staff members, rising to 41 out of every 1,000 crimes committed compared to 32 out of 1,000 crimes reported last year.

Commenting on the survey results, the BRC’s CEO Helen Dickinson OBE said: “These figures demonstrate the growing cost of crime against retailers, both human and financial. At a time when retailers have been cutting the cost of food and clothing to reduce the average price of our weekly shop, a small number of criminals are using ever-more sophisticated techniques to seize luxury items and target retail employees with abuse and acts of violence.”

Dickinson added: “The BRC remains fully committed to working in partnership with law enforcement agencies and retailers to cut crime and reduce the human and financial impact of the actions of a shrinking number of criminals.”

The report makes a series of bold recommendations. As stated, the BRC has pledged to work with law enforcement agencies in order to implement those proposals going forward.

The BRC feels that adopting a partnership approach towards tackling crime which affects retailers delivers benefits to both businesses and law enforcement operations alike. “Retailers should be consulted when crime-fighting priorities are agreed, whether at the national or at a local level,” suggests the Retail Crime Survey 2015.

Co-chaired by the BRC and the Home Office minister responsible for crime prevention, the National Retail Crime Steering Group continues to be a valuable forum for strategic-level partnership working.

Proper measurement of retail crime is crucial when it comes to tackling this form of criminality on an effective footing. The BRC is calling on all police forces to adopt the national definition of business crime such that data on crime affecting businesses can be collected, analysed and used on an operational basis.

For their part, Police and Crime Commissioners should consider developing dedicated business crime strategies along the lines of the Mayor’s Office for Policing and Crime’s (MOPAC) Business Crime Strategy adopted in London.

The BRC also asserts that more needs to be done at a cross-border level between police forces to identify and disrupt organised criminal gangs deliberately targeting retailers.

“In order to increase public awareness about how to keep personal data safe, there needs to be a single, high-profile national fraud prevention campaign which industry could support.”

The new Action Fraud IT system expected in 2016 must deliver a vastly improved service for retailers, outlines the BRC, including the ability to report fraud in bulk.

“The BRC wishes to see greater transparency around police performance in relation to fraud cases, with fraud detection rates published for each police force. The Government should consider how it can support police forces in enhancing their knowledge, skills and capacity to investigate and prosecute both fraud and cyber offences. A greater proportion of reported fraud cases simply must result in action being taken.”

There should be an agreed national process and single point of contact for businesses to report significant cyber attacks to law enforcement personnel, whether this is via the National Crime Agency or perhaps another route.

The BRC also suggests that there needs to be “greater consistency” in terms of how retail crime – and theft in particular – is dealt with by police forces around the UK. “We will work with others to identify and promote Best Practice in this area,” urged the BRC, “such as that realised by The Co-op’s ‘primary authority’ agreement with Nottinghamshire Police.”

“We can share more cyber security Best Practice within the industry,” explained the BRC. “We would encourage retailers to join the Government’s Cyber Security Information Sharing Partnership (CISP) and begin to share more cyber threat information.”

Insider threats should be treated as a corporate risk, much like any other. The BRC’s new Tackling Insider Threats Guidelines can help retailers to assess and mitigate threats to their business from the inside.

Businesses should also ensure they have adequate measures in place to protect members of staff from violence and abuse on the shop floor. The BRC’s Tackling Violence Against Shop Staff Guidelines will be of great assistance here.

“There remains a worrying lack of capacity across law enforcement to respond effectively to the fraud threat facing both businesses and the public,” stated Helen Dickinson. “In fact, 89% of respondents to the 2015 Retail Crime Survey reported no improvement in the service that their businesses receive from the police once a fraud episode has been recorded. This makes prevention all the more vital. That’s exactly why we would like to see a comprehensive national fraud awareness campaign form a central element of the Home Office’s new Crime Prevention Strategy.”

Dickinson continued: “Our 2015 Retail Crime Survey reveals that, on average, thefts by employees cost £788 more than each customer theft. Such ‘insider’ threats are often overlooked, yet the impact of malicious insider activity by an employee such as the theft of stock, or perhaps a complex fraud, can be quite significant.”

In conclusion, Dickinson said: “Tightening budgets inevitably present difficult choices in relation to policing resources and priorities. Arguably, this now makes the case for the police and businesses to tackle retail crime together even stronger than before.”