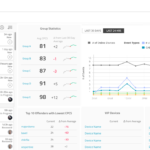 BlackBerry Cylance, a business unit of BlackBerry Limited, has announced the introduction of CylancePERSONA, the first proactive, native Artificial Intelligence (AI) behavioural and biometrics analysis solution for the security industry.

“Every day, rogue insiders and external threat actors exploit valid user credentials to launch cyber attacks, so there’s a clear need for organisations to ensure that every user logged into their network can be trusted at any time and at all times,” said Eric Cornelius, chief product officer at BlackBerry Cylance. “CylancePERSONA addresses this challenge. With a combination of flexible initial authentication, user-centric biometrics, AI behavioural monitoring and automated active responses, CylancePERSONA delivers a scalable, efficient and effective solution that can ensure trust of the user is continuous.”

Unlike other user monitoring solutions that rely on network traffic analysis or focus on detection without the ability to respond automatically, CylancePERSONA sensors are able to detect and score both malicious and anomalous conduct. CylancePERSONA monitors user activity and calculates a Cylance Trust Score. If the user trust score drops below a given threshold, step-up authentication action or suspension can be automatically initiated.

“Stealing valid credentials and impersonating users are two of the most successful vectors used by attackers,” said Rob Davis, founder and CEO of Critical Start. “CylancePERSONA is the first solution to provide organisations with a technology that can detect and respond to the use of stolen credentials on the endpoint, both on and off the corporate network.”

Key features of CylancePERSONA include:

*Behavioral biometric analysis: Continuous monitoring of user behaviour with real-time detection of suspicious keyboard and mouse actions that could indicate an imposter

*Contextual authentication analysis: Making use of previous user login activity such as location, time or method to ensure current login attempts are valid

For more information or a demo of CylancePERSONA visit www.cylance.com/persona