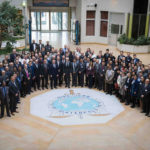 Responding to the threats posed by foreign terrorist fighters (FTFs), Interpol is working to increase the use of its biometrics databases and capabilities to better track their movements globally. Launched earlier this year, Project First is among Interpol’s initiatives designed to assist law enforcement in member countries to enhance their border security through the use of biometric data – such as fingerprints and facial recognition – on FTFs and other individuals linked to terrorist activities.

Underscoring the rapidly growing recognition of biometrics as a critical tool in the ongoing battle against transnational crime, participants at the inaugural Interpol ‘Fingerprint and Face’ Symposium included representatives from the UN Counter-Terrorism Committee’s Executive Directorate, the UK’s ACRO Criminal Records Office and the Biometrics Institute.

The two-day conference held on Tuesday 5 and Wednesday 6 December brought together no less than 125 experts in the fields of fingerprint examination and facial recognition from 58 countries, private sector partners and the world of academia to discuss the latest biometric tools and techniques.

With member countries sharing examples of potentially dangerous individuals identified as the result of integrating Interpol’s biometrics databases into their border checks, the participants also discussed the need for improving the quality of biometric data shared for more accurate identifications which can then be used in prosecutions.

Interpol’s Secretary General Jürgen Stock highlighted the importance of law enforcement moving from a ‘need to know’ to a ‘need to share’ culture relating to biometric data on known and suspected terrorists, and ensuring that this data reaches officers on the front lines in a timely manner.

“It’s vital for our membership to continue the information flow through Interpol’s secure platform as the proven method for closing information gaps,” explained Interpol’s leader.

Interpol’s fingerprint database contains more than 180,000 records supporting over 40,000 searches every year and leading to upwards of 1,700 global identifications in 2017. A facial images database was launched last year with data provided by more than 135 countries. This has generated 50 positive ‘hits’ in its first year.

With the exchange of forensic data in international investigations “a core and fundamental aspect of Interpol’s policing capabilities”, Secretary General Stock pointed to a case whereby the Greek authorities ran a series of checks on migrants arriving by boat against Interpol’s fingerprint database, in turn leading to the identification of an individual wanted in connection with a terrorist attack perpetrated in the Caucasus.