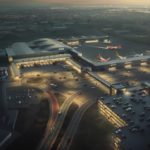 A national tactic already used across a number of key sites, including transport hubs and across London, Project Servator sees the deployment of both highly visible and plain-clothed police officers supported by a wide range of other resources. These can include detection dogs, armed officers, vehicle checkpoints, Automatic Number Plate Recognition (ANPR) systems and CCTV.

The deployments can happen anywhere and at any time across the airport footprint, and include police officers specially-trained to spot the tell-tale signs of individuals who may have criminal intent on their mind.

Inspector Ian Taylor of the Airport Policing Unit explained: “Project Servator is a tried-and-tested tactic which brings together a wide range of policing resources, working alongside the additional eyes and ears of businesses, security staff, enthusiast groups and members of the public to make it even harder for criminals, including terrorists, to succeed. The safety and security of everyone within the airport, from visitors to members of staff, is our absolute priority and these new tactics will ensure that we’re evolving as a workforce to combat the criminal activity we may encounter at the airport.”

Inspector Taylor continued: “The deployments will form a key part of our activity at the airport and support the vital work the team already does on a daily basis to keep the site safe. The public shouldn’t be worried if they come across a deployment. In fact, I would encourage anyone to talk to the officers to find out more. The public can play a key role in keeping the airport community safe by reporting anything that seems out of place or unusual or simply doesn’t seem to fit with day-to-day life.”

Since a trial began in June, the tactics have proven to be successful. Results have included seizures totalling £15,000, arrests of people for a range of offences, vehicle seizures and a significant number of intelligence reports.

Neil Thompson, operations director at London Luton Airport, stated: “The safety and security of our staff and passengers is our foremost priority and we’re pleased to support Bedfordshire Police in its adoption of Project Servator. We believe that this very public approach towards security will not only serve as a deterrent, but also provide daily reassurances to the many thousands who work at or travel from and to London Luton Airport.”