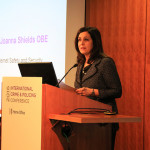 Baroness Joanna Shields OBE, Minister for Internet Safety and Security, has opened Day One of the second annual International Crime and Policing Conference.

The conference sees leading experts from a range of backgrounds – among them law enforcement, academia, the voluntary sector, industry and Government – brought together for two days to provide expert opinion and perspectives on modern crime prevention.

Day 1 of the conference focuses on ‘preventing crime in the digital age’ and Baroness Shields spoke about the Government’s work aimed at tackling cyber crime and online child sexual exploitation here in the UK and around the world.

Baroness Shields said: “While technology empowers the curious, it can also empower the criminal. Perpetrators today can target thousands of potential victims with a single keystroke, and without ever setting foot in this country. We continue to make great progress in reducing and preventing crimes in the physical world, but we have to evolve our approaches and capabilities to address the new digitally-enabled cyber crimes.”

The Baroness continued: “Online child sexual exploitation is a global and complex crime. That’s why the Government launched WePROTECT, which sees international law enforcement, governments, technology companies and civil society organisations working together to protect victims and bring the perpetrators of crime to justice.”

Baroness Shields added: “We owe it to the society of today and our children of tomorrow to leave the world a safer place than the one in which we found it.”

The Child Abuse Image Database (CAID) supports law enforcement agencies in pursuing offenders involved in child sexual exploitation and seeks to safeguard the victims. It contains 4.7 million images, which police forces across the UK have uploaded to the database.

Previously, a case with 10,000 images could typically take up to three days to process. Now, after matching images against CAID, a case like this can be reviewed in just an hour.

CAID was launched by the Prime Minister David Cameron and Home Secretary Theresa May in December 2014 during the WePROTECT Children Online Summit in London. WePROTECT aims to bring together governments, NGOs, industry and civil society organisations to pledge global action to eliminate online child sexual exploitation.

A second WePROTECT Summit was held in Abu Dhabi last November. Representatives from no less than 41 countries and international organisations signed a ‘Statement of Action’ and, in so doing, committed to develop a national response to online child sexual exploitation, publish an analysis of their response and use this to identify further capabilities that may be needed.