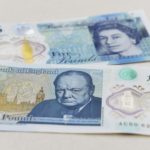 As of Friday 5 May 2017, the paper £5 note has been officially withdrawn from circulation and is no longer legal tender. While banks, building societies and the Post Office are likely to accept these notes after this date, paper £5 notes can also be exchanged at the Bank of England, either in person or by post, for the new polymer note, which was introduced in September last year.

In light of these changes, crime prevention initiative Banknote Watch is providing businesses and members of the public alike with advice on how to identify legitimate polymer £5 notes. The Bank of England advises that while only a small proportion of notes are counterfeit – 0.0075% in 2015 – the new polymer notes have an array of security features that will make them even harder to forge. For one, there’s a large see-through window on the note with a clearly defined portrait of Her Majesty The Queen printed on it and the words ‘£5 Bank of England’ printed twice around the edge.

A finely detailed metallic image of the Elizabeth Tower is also positioned over the window. The foil is gold on the front of the note and silver on the back, creating a multi-coloured rainbow effect when tilted.

Other security features include a silver foil patch on the front of the note beneath the see-through window. When the note is tilted, the word ‘five’ changes to ‘pounds’ accompanied by a multi-coloured rainbow effect.

*A complete checklist of the security features can be found on the Bank of England’s website http://www.bankofengland.co.uk/banknotes/Documents/thenewfiver.pdf

Discussing the new notes, Victoria Cleland (chief cashier at the Bank of England) explained: “Polymer banknotes are cleaner, more secure and more durable than paper banknotes. They provide enhanced counterfeit resilience, and I would strongly encourage everyone to learn about their exciting security features.” 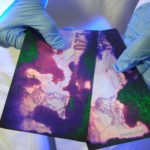 While it’s important to be on the lookout for counterfeit notes, it’s also essential to take action if you come across a dye-stained note. A damaged note with staining on it is likely to be a stolen note, as dye-based systems are often incorporated into ATM machines or cash boxes. If cash boxes are forced open in a robbery, a coloured, liquid dye will be released, staining the notes and making them easy to identify as having been stolen.

The dye itself also contains a DNA solution, meaning the note can be traced back to its original location if returned to the police – a vital step in helping to catch criminals.

It’s very important for members of the public and businesses to hand dye-stained notes to a bank, building society or the Post Office. Staff will then provide a BEMN Form, which is used to return the banknotes to the Bank of England. The customer will then obtain a refund of the face value of the note, provided the note is genuine.

“It’s essential for everyone to understand that a stained note is probably a stolen note,” explained Hilaire O’Shea, national co-ordinator for Banknote Watch. “We’ve created guidelines for the public and retailers on the Banknote Watch website. By following the proper procedures and returning banknotes to a given bank, you’re playing an essential role in fighting this crime and aiding the police in identifying where the stolen note came from.”