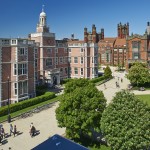 The highlight of the recent 2015 Association of University Chief Security Officers (AUCSO) Conference Dinner held at the UK Space Centre was the presentation of the organisation’s annual awards and two new Fellowships.

AUCSO is the leading authority for security professionals working in Higher and Further Education in the UK and Europe. The Association provides a forum for its members to exchange knowledge, information and Best Practice relating to security management.

Members are linked through geographic regions, each of which has its own representative who sits on the Association’s Executive Committee.

There were three main awards presented by AUCSO’s new chairman Mark Sutton. They were bestowed as follows:

*2014 Security Officer of the Year Award (Sponsored by Mitie TSM)

This award was won by Dave Stewart, team leader at Aston University, for an “outstanding” piece of security work. Without thought for his own personal safety, Dave stepped outside the normal expectations of his role and pursued and detained an individual off campus who had just seriously assaulted a female member of staff.

Members of the Charlie Team at the University of Surrey were commended for “continued leadership, initiative and determination” to reduce crime and make the university a safer place for students, staff and visitors alike.

The 2014 award goes to Garry Williams – training and quality manager for Coventry University’s Protection Service – for his “continuous improvement, training and development” of the university’s protection officers.

AUCSO Fellowships are awarded in recognition of an “outstanding, sustained and influential contribution” in advancing the objectives and aspirations of the Association. This year, the AUCSO Executive Committee has recognised two distinguished members:

David Owen, AUCSO’s Secretary, has been recognised for over 20 years’ involvement and service with the organisation, firstly as a member and a conference host and then, for the last ten years, as voluntary AUCSO Secretary.

Ireland Executive Member Ray Wheatley gains a Fellowship for more than 20 years’ service as a member, and in particular for ten years as a member of the Executive Committee representing Ireland and Europe and for his role as international liaison member. Wheatley has also hosted two conferences in Dublin.

Highlights of the AUCSO Annual Conference

The AUCSO 2015 Annual Conference held at Loughborough University attracted around 100 delegates. Sessions were wide ranging and included a focus on subjects such as threat management in Zurich, implementation of the SafeZone App, training opportunities, updates on ‘Prevent’, tips on procuring security contracts, use of CCTV at the National University of Singapore, the National Crime Agency and an update from Tony Porter, the UK Surveillance Camera Commissioner.

Alongside the Annual Conference ran an exhibition of security products with some new suppliers taking part in addition to existing sponsors.