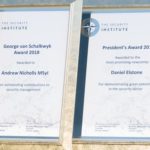 Ashton Kingdon, a student at the University of Portsmouth, has been recognised by The Security Institute for the “unique research” displayed in her Master’s dissertation entitled ‘Seductions of the Caliphate: A Cultural Criminological Analysis of Online Islamic State Propaganda’. Kingdon has been awarded the 2018 Wilf Knight Award for her distinction in academic study as well making a significant contribution to the further development of professional security management.

Speaking about her University of Portsmouth Master’s degree, for which she studied via distance learning, Kingdon stated: “Throughout this degree, I was also working full-time within the funeral industry. My research consisted of a semiotic content analysis of Islamic State propaganda to explore the sub-cultural elements of radicalisation.”

Kingdon is currently completing her second Master’s degree and PhD in Web Science at the University of Southampton. Her current research focuses on right-wing radicalisation with a specific focus on the power and influence of memetic warfare and the institutional interconnections that exist within right-wing subcultures, in addition to how their values are internalised through the propaganda they disseminate. 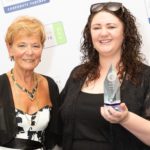 “This interdisciplinary research combines the fields of criminology, history and computer science to explore the ability for far-right groups to construct dominant narratives that effectively mobilise and control the masses,” observed Kingdon, “and the impact the web has on increasing the symbiotic relationships between right-wing groups and their online audiences.”

Kingdon’s accolade was bestowed on the evening of Wednesday 27th June as The Security Institute hosted its second annual Summer Awards Gala and Dinner event at ZSL London Zoo. The event, which was sponsored by Institute Corporate Partners ICTS Consult and Excellentia, was attended by over 80 guests and well supported by members, guests and directors as well as members of staff from the Institute’s headquarters.

The first award of the evening was presented to Dan Elstone, a non-member who aspires to begin learning on the Institute’s BTEC Level 3 Certificate in Security Management. Elstone was nominated by Lee Garner MSyI to receive the President’s Award for demonstrating his great potential in the security sector. 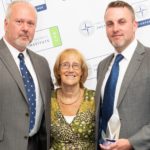 Elstone has only been in his current post as security supervisor with Ribby Hall Village for just over two years. In this time, Elstone has written policies for security procedures on the site and for CCTV in relation to data protection principles with General Data Protection Regulation considerations very much in mind, as well as recently passing his IOSH qualification in fire safety to become a fire safety officer for the village.

Elstone also initiated new technology for the facility and negotiated the purchasing of body cams for all security officers. He has been instrumental in mobile defibrilator equipment purchases and training for all officers in their usage.

As a direct result of all of the above achievements and more during his short time in post, Elstone was very highly scored in his first appraisal which resulted in his promotion of two grades within the organisation. The epitome of a young security professional, Elstone has developed and honed his skills not only in the security sector, but also in other associated business fields. 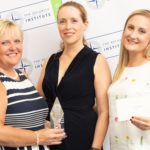 The second award of the night was accepted by The Security Institute’s Education Partner, PerpetuityARC, on behalf of Stephen Mangan. Mangan was awarded the John Aplin Award for achieving the highest score on the Institute’s BTEC Level 3 Certificate distance learning programme. The award comprises of a £100 cheque and certificate, and is named after the International Institute of Security’s former director and deputy chairman who played a major role in producing the first levels of the NVQ’s for the industry.

On behalf of the International Institute (with whom The Security Institute merged in 2008), Aplin was responsible for its important relationship with City & Guilds to ensure that a high standard of examination was maintained.

PerpetuityARC said of Mangan’s academic performance: “Throughout his studies on this course, Stephen demonstrated an exceptional ability to explore new concepts, a creative approach and outstanding presentation skills. He really understands how to simplify complex theories, and we’re very pleased that he has won this well-deserved award.” 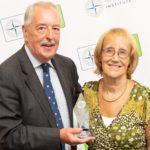 Institute president Baroness Ruth Henig CBE presented the final award of the night to Andrew Nicholls MSyI. Nicholls won this year’s George van Schalkwyk Award for his outstanding contributions to security management throughout the previous year. Nicholls is a long-time friend of The Security Institute and was nominated by CEO Rick Mounfield for his many years of service to the wider security community which deserved recognition.

Nicholls committed himself to The Security Institute in 2012 with a view to professionalising the members – and therefore increasing the capability of the sector – by joining the Board of Directors, later becoming the interim CEO before Mounfield’s appointment last Spring.

His input was invaluable and he quickly made his mark, encouraging the Board to expand its reach into the public sector, as well as securing two major partnerships with the Foreign and Commonwealth Office and the Civil Aviation Authority that started the ball rolling in terms of further engagement with agencies across the Government and defence sectors.

Nicholls now volunteers his time as chair of the East Midlands region of the CSSC and will no doubt make continuing positive impacts in this area.