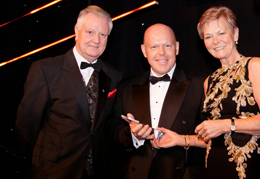 Now in its sixth year, The Security Institute’s prestigious Wilf Knight Award is presented in recognition of a unique piece of research into a security management-based subject. In 2014, the proud winner of this highly sought-after accolade is Andy Bowers, who receives a glass engraved trophy and a cheque for £500.

Bowers has served for 28 years in the Hampshire Fire and Rescue Service and is currently the Assistant Chief Officer” Head of Community Response, a role affording him responsibility for all emergency response activities. This includes the most common areas of fire-fighting and road traffic collisions as well as specialist teams such as Urban Search and Rescue, Water Rescue, Maritime Response and Hazardous Materials.

Bowers completed national work for the Chief Fire Officers Association on the subject of operational assurance before becoming involved with the national Incident Command project. He was also one of the founder members of the South East Ways of Working Project which then developed into the Collaborative Partnership (and will now become part of a suite of national guidance documents in the near future).

Bowers holds a Masters in Business from the University of Portsmouth and is currently studying for an MSc in Crisis and Disaster Management.

Nominated by Dr Sara Thorne for the Wilf Knight Award, Bowers’ dissertation entitled: ‘Improving Tactical Decision-Making for Crisis and Disaster Responders’ focuses on the response and emergency life-saving element of crisis and disaster management. By considering the role of the Hampshire Fire and Rescue Service (and, specifically, assessing its incident command processes), this research investigates a means of improving command decision-making by first responders at emergency incidents.

The 2014 Judging Panel” whose cohort included Brian Sims BA (Hons) Hon FSyI, the Editor of Risk UK” felt that Bowers’ winning paper addresses a critical area of security and risk management. The document demonstrates thorough research and a well-presented argument on decision-making for emergency responders with an extremely usable recommendation particularly for the Fire and Rescue Services.

Bowers’ insightful and original approach” could lead to great practical improvements” in terms of how our emergency services deal with incidents from the outset.

Patricia Knight (Wilf Knight’s widow) and Garry Evanson CSyP, deputy chairman of The Security Institute, recently presented Bowers with his award. Evanson commented:” I’d like to offer my congratulations to Andy who’s a very worthy winner. This award is always hotly contested and it’s a real achievement to win it. I think there’s much that we can all learn as a result of Andy’s diligent and detailed work.”

Richard Diston was runner-up with his paper entitled: ‘Does the mandatory training for managing work-related violence and the use of force for front line security staff actually protect stakeholders from harm or create additional risks?’ Diston was nominated by Danie Adendorff of Loughborough University.