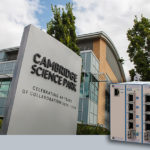 Situated on the perimeter of the university town of Cambridge, the Cambridge Science Park was established in 1970 by Trinity College Cambridge and today encompasses 1.7 million sq ft of high technology and laboratory buildings across its 150-acre site. With approximately 7,500 people employed at over 100 companies, ranging from new start-ups to some of the world’s leading technology businesses, companies and entrepreneurs at the Cambridge Science Park work on life-enhancing solutions, ranging from non-invasive diagnostics and novel medicines through to next generation display and communications technologies.

With a 35-year history in the security industry, Briar Security is highly experienced in the development and installation of security solutions across a broad range of applications. Commenting on the transmission specification for the new Cambridge Science Park system, Stephen Cook (managing director of Briar Security) explained: “The original CCTV system was quite old, with some components estimated to be over 15 years old and either poorly performing or at the end of their operational lifecycle. In addition, some elements of the CCTV system were non-operational, meaning that the site’s security team was being hindered by limited situational awareness across some areas of the Cambridge Science Park. Further, the existing CCTV system pre-dated a number of areas of the Cambridge Science Park which had been redeveloped, or were due to be redeveloped in the near future. As such, it only offered partial surveillance coverage, with no coverage at all in some areas.”

Cook went on to comment: “As owner of the freehold, Trinity College Cambridge required an enhanced IP video surveillance system. We were selected to deliver the system after a competitive tender process managed by the independent property consultancy Bidwells. The property consultancy wanted the specification of the new surveillance system to offer 100% redundancy and flexible expansion capability.”

The Briar Security team identified that the existing transmission and power infrastructure was inadequate to support a new state-of-the-art security system. “It was important for a completely new underground duct system to be installed to route over 4 km of fibre optic cable that was needed to create a network backbone, as well as 6 km of Cat6 cable and new mains supply that UK Power Network needed to install to power the entire system,” explained Cook. “Again, we designed this element with 100% redundancy, making sure that the Cambridge Science Park management’s investment would be future-proofed for many years to come.”

Cook observed: “Being product agnostic, and not tied to any particular security equipment manufacturer with a contractual agreement, we are independent and can specify equipment from any provider, tailoring solutions to maximise a client’s brief and budget. From experience, we knew that the AMG Systems product portfolio had the capability to deliver a high-performance power, data and video transmission solution for this flagship site.”

The new underground duct system was installed to serve the Cambridge Science Park. Fibre optic cable was routed for the backbone of the new network, in addition to a new mains supply to roadside locations around the site. Here, the AMG managed industrial Ethernet switches were installed in cabinets to provide power and control data to the cameras, and receive video via a Cat6 cable wired to each pole-mounted camera.

Six 1 Gb SM Fibre rings were installed, each with 3-4 AMG9IM2P-8FH-2S-P240 switches connecting the cameras via Cat 5e/6 (GbE) cable. Each ring is then linked to Avigilon servers and three desktop control points at the Control Room via three dedicated AMG9IM2P-4G-2S switches and a single AMG9CLMP-24G-4XS-ST switch.

The AMG switches have up to 16 Fast or Gigabit Ethernet ports with up to four additional dual speed SFP ports for data uplink, making them the perfect choice to provide Cambridge Science Park with the best performance and most reliable switch, plus the critical expandability element for the developing site’s future needs.

The AMG switches also offer a common web browser interface for configuration of all aspects of the device, thereby simplifying installation and minimising set-up time at this expansive project. Supporting 10/100/1000 Mbps data rates and providing full duplex, the flexible AMG switches are also compact and easy to use. They feature the added benefit of rapid spanning tree and multiple spanning tree protocols, with Ethernet ring protection switching and IGMP functionality to deal with the multicast traffic commonly used in IP video surveillance deployments.

With 30 W PoE+ on each Ethernet port and housed in a compact chassis, the DIN rail-mountable AMG devices are ideally suited for connecting and powering field-based equipment, such as the latest Avigilon IP cameras used at the Cambridge Science Park. Robust and reliable, they were specified to provide the performance, reliable operation and expansion capability the Cambridge Science Park’s management was looking for from the outset of this project.

Video from the network of 144 IP cameras is transmitted to Cambridge Science Park’s dedicated Control Room. Here, the images are monitored at three Avigilon Control Centre VMS stations, from where the security team can direct members of the security staff to deal with any incident or manage the site’s day-to-day activity.

“The new system has already proven to be very successful at the Cambridge Science Park,” stated Jonathan Wright, associate responsible for building surveying at Bidwells. “Designed for security, the system and cameras provide reassurance to employees and the many visitors to the high-profile site. The designed-in expandability of the system has already been employed to support extended camera coverage across some newly developed areas.”

Wright added: “Thanks to its high-level design, we were confident in the technology we were investing in from the outset, while the innovative design architecture of multiple fibre ‘rings’, combined with leading-edge AMG switches, means that the camera system can be expanded easily and, importantly, with minimal downtime.”

In conclusion, Wright outlined: “Our design ethos right from the outset was to provide the Cambridge Science Park with the best CCTV performance available, combined with the ultimate in flexibility and expansion for the future. Using AMG transmission technology combined with the industry knowledge of Briar Security has realised that.”

Thanks to the combined expertise of Briar Security, Bidwells and Norbain, amalgamated with the technical capability of AMG, the Cambridge Science Park now has a world-class security solution fit for one of the world’s leading technology centres.