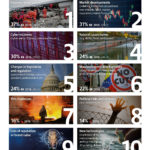 Cyber security and related issues are fast emerging as the biggest risk for today’s companies. That’s the firm belief of risk experts in the UK and overseas whose views are showcased in the sixth annual Allianz Risk Barometer issued by Allianz Global Corporate and Specialty SE (AGCS).

The in-depth survey of over 1,200 experts from 55 countries demonstrates that, as companies embrace digitisation and increasingly interlink their equipment, processes and supply chain – the so-called ‘Internet of Things’ – so the risk of financial losses rises exponentially.

The cyber threat now goes far beyond hacking. Privacy and data breaches in tandem with new data protection regulations will exacerbate the fall-out for businesses. Time is running out for companies to prepare for the implementation of the new EU General Data Protection Regulation across Europe in 2018. The cost of compliance will be high, so too the risk of related penalties for any non-compliance.

In addition, interconnectivity and the increasing sophistication of cyber attacks poses risks for companies not only directly, but also indirectly through exposed critical infrastructure such as IT, water or power supplies which may be prone to periods of interruption. In today’s ‘Industry 4.0’ environment, failure to submit or interpret data correctly could halt production.

The Allianz Risk Barometer 2017 shows that smaller companies may be underestimating their cyber risk: companies with revenues of less than €250 million rank cyber incidents as their sixth biggest risk. However, the impact of a serious incident could be much more damaging for such firms.

Worldwide, cyber concerns ranked third in the list of top risks, but second in Europe and the United States. Particularly worried are those respondents in the trade and information and communication technology industries.

Companies are also facing potential financial losses as the changing political landscape engendered by Brexit, the US Presidential Election outcome and the upcoming polls in the EU (among others) raises fears of increasing protectionism and anti-globalisation trends.

Since 2014, there have been around 600 to 700 new trade barriers introduced globally every year.

Market developments and volatility are seen as the second biggest risk by businesses across the world. Industries such as aviation and defence, financial services, marine and shipping and transportation view this as the biggest risk of the year, as do companies in Africa and the Middle East region.

“Companies worldwide are bracing themselves for a year of uncertainty,” explained Chris Fischer Hirs, CEO of AGCS. “Unpredictable changes in the legal, geopolitical and market environment around the world are constant items on the agenda of risk managers and, indeed, senior management in general. A range of new risks are emerging beyond the perennial perils of fire and natural catastrophes which require a degree of re-thinking around current monitoring and risk management tools.”