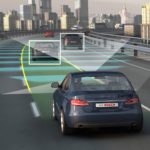 Developments in self-driving technology suggest that fully-autonomous vehicles will be on our road networks in the near future, but just how far are we from the point of introduction? Importantly, is the advent of such vehicles potentially going to signal an increase in the terrorism threat? Paul Woodhouse evaluates the security mechanisms that must be put in place.

An autonomous car (also known as a driverless car, a self-driving car or a robotic car) is, in essence, a vehicle that’s capable of sensing its surrounding environment and navigating without benefit of human input. Such vehicles employ a variety of techniques to detect their surroundings, such as radar, laser light, GPS, odometry (ie the use of data from motion sensors to estimate changes in position over time) and ‘computer vision’.

In use, advanced control systems interpret sensory information to identify appropriate navigation paths, as well as obstacles and relevant signage. Autonomous cars must possess control systems capable of analysing sensory data in order to distinguish between different cars on the road.

The potential benefits of fully-autonomous vehicles include reduced mobility and infrastructure costs, increased safety, enhanced mobility and a heightened degree of customer satisfaction. The hope is that there’ll be a significant reduction in traffic collisions and the resulting injuries and related costs, including less need for insurance.

Autonomous cars are also predicted to increase traffic flow, provide enhanced mobility for children, the elderly, the disabled and the poor, relieve travellers from driving and navigation chores, lower fuel consumption, significantly reduce the need for parking space and facilitate business models for Transportation-as-a-Service, notably via the sharing economy.

As Google tests its own self-drive vehicles, clocking more than 200,000 miles in a fleet of self-driving cars retrofitted with sensors, and the authorities in Las Vegas begin trials of self-driving shuttle buses, it would appear that we’re not too far away from witnessing fully-autonomous vehicles on our roads.

What are the risks?

While there are a small number of issues that have been outlined in the trials so far, there could well be a more serious risk posed by autonomous vehicles that needs to be considered. In a recent article published by The Guardian, lawmakers have warned that autonomous vehicles must have secure and safe technology in place to prevent their use as an accessory in terrorist attacks.

In recent times, trucks and vans have been the ‘weapon of choice’ in terror attacks across the globe. Last year alone, there were seven terrorist attack episodes that made use of vehicles. All of them realised disastrous consequences, costing the innocent lives of multiple individuals here in the UK as well as in Spain, Canada, Germany and Sweden.

Unfortunately, instead of engendering a feeling of excitement around this new technology, talk of the development of self-driving trucks and vans has left some practising security and risk management professionals extremely worried that terrorists will indeed look to take advantage of fully-autonomous vehicles in future attacks.

Modern-day cars are already showcasing some of the capabilities of self-driving technology, with many drivers progressively trusting their vehicles to carry out tasks which, in days gone by, would always need to be conducted on a manual basis.

We already benefit from systems which keep us in our lanes on dual carriageways and motorways, technology that can help to parallel park our vehicles for us and software that automatically maintains a safe, steady speed on the UK’s roads – with some cars even advanced enough to also have automated braking systems when tracking the vehicle in front. Fair to say that self-driving technology is revolutionising the driving experience.

Organisations trialling self-driving vehicles have found that, for the safe driving of these vehicles on our roads, they need to mirror human driving behaviour while eliminating human driving errors. What next, then?

For fully-autonomous vehicles, manufacturers need to converge sensor-based technologies and connected-vehicle communications so that they can deliver safer self-driving techniques than could be realised by each approach being developed and then acting on its own.

The use of vans and trucks as part of terrorist attacks has grown in frequency because of their size and anonymity. They’ve been used to drive into crowded pedestrian areas at high speeds with devastating results. It has been predicted that such vehicles will be among the first fully-autonomous vehicles on our roads. Consequently, officials know that they need to play a crucial role in mitigating the use of trucks as lethal rolling weapons.

If terrorists can use a self-driving vehicle as a weapon in future terror attacks, then those vehicles become a weapon that separates the instigator from the event. Terrorists would no longer have to sacrifice their lives for attack episodes, and it would become harder to trace the suspect(s) if they don’t need to be at the scene of the attack when it happens.

Due to the nature of this threat, industry professionals and lawmakers are keen to point out that all self-driving vehicles must be fitted with specialist cyber technology to prevent terrorists from employing them in attacks.

Lawmakers are passing legislation to say that all autonomous vehicles must be armed with cyber security technology so that they cannot be used as an accessory in a terror attack. This technology aims to make it incredibly hard, if not impossible, to hack vehicles for a hijack, meaning that potential terrorists cannot use autonomous technology as an accessory.

The intention is that self-driving vehicles will not be able to be programmed by terrorists to break standard safe driving laws, either, meaning that the potential for high-speed driving attacks could potentially be eliminated if the cyber technology is indeed a success.

Van hire and rental companies should also be aware of stricter rules and regulations that will be implemented. Many trucks and vans used in terror attacks around the world are rental vehicles. In recent attacks, hire vehicles have been used to cause mass disaster. It has been suggested that companies should have access to a wider database that reveals more sensitive information in the future, such that companies are aware of suspect individuals.

While databases currently check against identities, credit ratings and insurance policies, the threat of terrorism may lead to a more detailed and sensitive database. The overriding aim is to afford rental companies access to police records and, in some cases, companies will be able to see if the individual is being watched on suspicion of having committed – or being about to commit – terrorist crimes.

Stricter regulations should help companies to identify individuals who could be potential risks, in turn allowing them to alert the authorities of any suspicious individuals.

Furthermore, the UK’s first suite of Terrorism Risk and Incident Prevention (TRIP) products and training to support fleet operators has been developed by Fleet Source, a leading provider of training and auditing services for the road transport industry. The overriding aim is to reduce the risk of commercial vehicles being used as weapons in terror attacks.

The products and services available serve to educate fleet operators, managers and drivers of the risks of terrorism, the nature of the threat and safety precautions that can be implemented to reduce the possibilities of their vehicle being hijacked, stolen or otherwise employed in a terrorist incident.

The Government also hopes to develop geo-fencing systems to prevent unauthorised vehicles from entering particular areas of a city. These systems create a virtual barrier that’s used to slow down vehicles and control their speed as soon as they enter the sensitive area by way of tracking satellites. In practice, the satellite system would automatically connect with the vehicle and take control of it such that the vehicle only travels at a safe speed within the defined area, thus acting as a ‘virtual barrier’ or ‘virtual bollard’ to stop the vehicle.

The Government needs to act now before self-driving vehicles are readily available. Implementing rules and regulations from the word ‘Go’ means that everyone’s aware of the process from the start. Thankfully, with strategies such as TRIP already actively engineering safety precautions, we already find ourselves a crucial step ahead in the game.

Paul Woodhouse is Marketing Manager of The Vindis Group