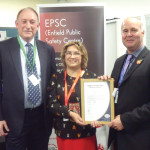 Enfield Public Safety Centre has gained the Surveillance Camera Commissioner’s Certificate of Compliance. This relates directly to Enfield’s public space CCTV, which has been thoroughly audited and found to comply with the 12 guiding principles of the Surveillance Camera Code of Practice (in accordance with the Protection of Freedoms Act 2012). Indeed, Enfield is the first London Borough to be certificated against this Code.

At the ceremony, the Council also received its monitoring centre certificate BS 5979, along with certificates for CCTV management and operation (in accordance with BS 7958) and BS 7958 Annex B relating to traffic enforcement.

A further certification covers the provision of lone worker devices in accordance with BS 8484. The Centre currently provides safety monitoring for around 400 such workers, including security officers, social services employees and housing staff carrying out vital work in the community at libraries, schools and hospitals.

Auditing by the SSAIB

All of the various certification procedures were audited by the SSAIB, with Alex Carmichael subsequently praising the work completed by Alan Gardner and his team.

“With the Council’s political backing, Enfield’s Public Safety Centre has become a Centre of Excellence,” enthused Carmichael, “which is an important example in the current climate of budget cuts. It demonstrates how compliance can both reassure the public and draw in partners for future technological collaboration that helps drive up standards and increase the quality of safety and security in the Enfield area.”

UK Surveillance Camera Commissioner Tony Porter concurred. “The whole issue of public space surveillance is going to come under greater scrutiny,” stated Porter. “This certification is an outward sign of inward success and a demonstration to the community at large that Enfield Council takes the safety of its residents very seriously indeed. It also shows that the Council views surveillance cameras as being there to support the community, not to spy on it.”

Meanwhile, Labour Councillor Yasemin Brett complimented Alan Gardner’s management of the Enfield operation, pointing out that: “In these days of austerity, CCTV has proven to be an efficient and effective way of assisting the police service and other community safety partners in tackling crime.”

Enfield Council’s Public Safety Centre now monitors over 300 public safety surveillance cameras in addition to dedicated intruder alarm systems and lone worker services covering many civic buildings, depots and other sites. The intention is to expand this coverage in due course such that it encompasses schools, hospitals, other public buildings and social landlord sites both within Enfield and further afield.

Following on from the professional audits and accreditation by the SSAIB, Enfield Council is now actively marketing its state-of-the-art monitoring facilities to other prospective clients.

Founded in 1994 and based in Tyne & Wear, the SSAIB certificates organisations providing electronic security systems, security guarding services, fire protection solutions, alarm and telecare services systems in the UK and the Republic of Ireland.

Over 1,700 companies are now listed on the SSAIB’s register.