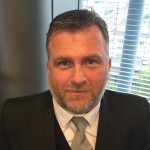 At the ASIS International UK Chapter’s 2015 Annual General Meeting – which took place on Thursday 10 December at the offices of State Street Bank in London’s Canary Wharf – David Clark CPP PCI PSP was elected as the new chairman of the Chapter. He will take office on Friday 1 January.

Along with Dr Peter Speight CSyP, Dawn Holmes MSc CPP and Steve Emmins, Clark had been co-opted to the ASIS UK Chapter’s Board during the course of the year. All were formally elected at the AGM.

David Clark has been operational in the security business sector for over two decades now, having left the Army back in 1993. During that time he has held a number of senior security positions both within corporate organisations and in the private sector.

At present, Clark is head of security for The Francis Crick Institute, a biomedical discovery institute dedicated to understanding the scientific mechanisms of living things. The organisation’s work is focused on helping to understand why disease develops and to find new ways of diagnosing, treating and preventing illnesses such as cancer, heart disease, stroke, infections and neuro-degenerative diseases.

By bringing together scientists from many disciplines, The Francis Crick Institute will help to improve people’s lives and keep the UK at the forefront of innovation in the sphere of medical research, attracting high-value investment and strengthening the economy.

Previously, Clark has led on a number of policing and counter-terrorism initiatives in London’s South Bank (he served as security and risk manager for the South Bank Employers’ Group from January 2008 through until January 2013) and, in recent years, has also designed and implemented executive protection and physical security programmes for major companies both here in the UK and overseas.

He’s a member of the ASIS CSO Round Table and the Association of University Chief Security Officers, a committee member and secretary of the Project Griffin London Executive and, on behalf of ASIS International’s UK Chapter, serves as the current chairman of The Security Commonwealth.

Clark replaces Andy Williams CPP, head of security at Nomura International, who leaves the ASIS UK chairmanship after two years to take up a European role for ASIS International as assistant regional vice chairman of Region 9A.

There’s no doubt that Clark takes the reins at an exciting time for the UK Chapter, with the ASIS European Security Conference and Exhibition returning to London next year – the event runs from 6-8 April – and the launch of a number of exciting educational and partnership initiatives to be announced very shortly.

Each ASIS International Chapter is self-funding. Support for the UK Chapter from sponsors, partners and exhibitors alike reached an all-time high in 2015, which absolutely demonstrates the value and prestige associated with the ASIS brand and the hard work of the volunteer leadership of the Chapter.

Founded in 1955, ASIS International is dedicated to increasing the effectiveness and productivity of security professionals by developing educational programmes and materials that address broad security interests.

The organisation develops conference and educational programmes on the international stage and actively advocates the role and value of the security management profession to business, the media, Government entities and members of the general public.

The UK Chapter of ASIS International is the largest in Europe and one of the biggest in the world outside of America. Vice chairman Graham Bassett (of GBR UK) and HJA Recruitment’s director Mike Hurst presently serve on the ASIS International European Advisory Council.